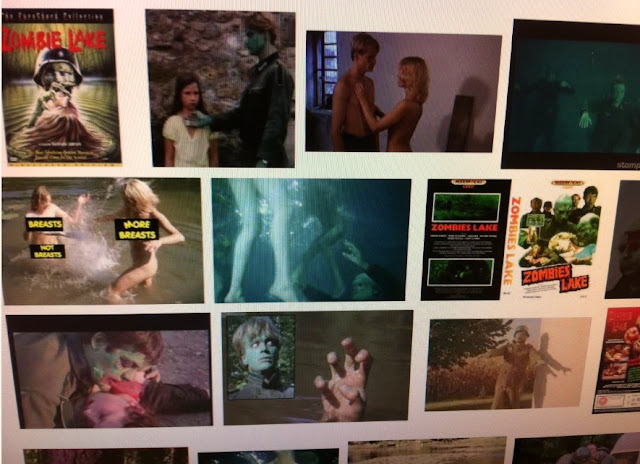 Well, the time has already come to attack another Rollin film.  Granted this one isn’t actually credited to Rollin.  It’s credited to some kind of Rollin-Laserna hybrid called J.A. Laser. Anyways, “Le Lac des Mort Vivants” a.k.a. “Zombie Lake” is supposedly the worst of the Aquatic Nazi Zombie movies (yes, it is actually a recognized sub-genre), but we’re here to find out if there is any truth to that claim.  It’s a pretty dismal playing field from what we’ve seen, so being the worst would be quite an accomplishment.  Let’s do this.  At least we won’t need subtitles because of our aforementioned French speaking capabilities.  Oh yeah, this was produced in 1981…

[Movie opens with a girl stripping and swimming around, until a Nazi zombie drowns her.  I know that it’s a Nazi because of the movie’s title.  If not for that, I would assume he was a witch from a bad children’s’ television program, or Lou Ferrigno.]

Starkwell: Why would the zombie need to take such a big breath when he pops up… isn’t already dead?

Lovelock: Maybe he was silently roaring?

Starkwell: Seems like they made this movie as an excuse to film naked women with an underwater camera.

Lovelock: Was that a criticism?

Starkwell: That’s the worst looking zombie I have ever seen.

[Zombie bites a girl’s neck.  Villagers take the dead body to the Mayor.]

Starkwell: The bite mark is on the opposite side of where the Incredible Hulk bit her…

Lovelock: Who needs continuity when you have Nazi zombies and boobies?

[They woke up from horrible overly French music, and just into time to see a large group of girls going skinny dipping in the lake.  Nazi zombies are on the prowl.]

Starkwell: At least someone is having fun.

Lovelock: That Nazi kicked the other one in the head.  It clearly moved his green bathing cap. They’re still taking breaths before they go underwater…

[Nazi zombie walks into house and gives a little girl his necklace.]

[Zombies rise out of the water and attack the cops.]

Starkwell: Holy shit, one of them just adjusted their fake nose.

Lovelock: Are they attacking that cop or making out with his neck and face?

The zombies came out of the water and started tearing up the town.  By tearing up the town, of course, I mean gingerly pushing chairs over at the local watering hole.  I should mention that in this montage of zombie action (I use that term loosely) we see many more pairs of French breasts.  Starkwell definitely has one foot out the door.  The novelty of this film wore off of Lovelock about ten boobies ago.  Considering how they just rose from the water in those thick army jackets, “they all look remarkably dry”, noted Starkwell. The villagers form a posse to take out the Nazi zombies.

Starkwell: Is it just me, or is the posse made up entirely of old people, and winos, and pussies?

Lovelock: Well, it is France.

[The zombies are shown underwater in the lake.]

Starkwell: Apparently the lake has an underwater light on its concrete wall.

[Zombies rise from the water.]

Lovelock: Either that is the exact same shot as before, or that one zombie can’t seem to keep his nose on.

[Who the hell knows what is even happening anymore, but apparently necklace girl can save everyone with a bucket of blood.]

Starkwell: This is the dumbest plan I’ve ever seen.

Lovelock: But look!  It worked!

Starkwell: Unlike this movie, which doesn't.

Then there were some of the worst fire effects ever committed to film, and then it ended.  When the highlight of a zombie film is the early eighties eurosex/ nudity scenes, it is safe to say that you have a bad zombie film.  This is one of the worst movies that I have ever seen.  Case closed.  Well, actually, the soundtrack was pretty rad.
Documented by Kev D. and Posted at 09:15