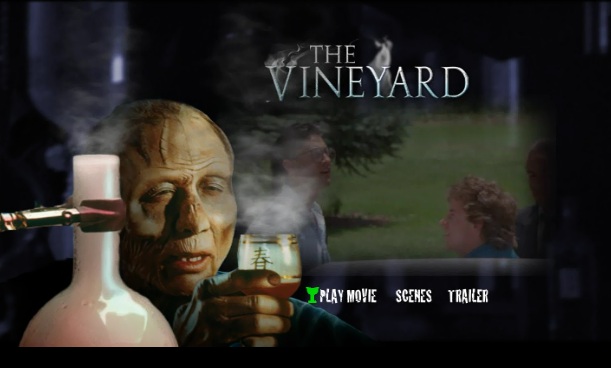 James Hong, who I will always know as the guy from "The Golden Child", "Big Trouble in Little China", and the 'Chinese Restaurant' episode of "Seinfeld", wrote, directed and starred in a unique zombie movie in 1989.  It was a movie called "The Vineyard", and Lovelock and Starkwell are totally pumped.  Although released by Anchor Bay on DVD, from what I have read, this appears to be an Image release.  If the song playing during the DVD menu is any indication of what we are in store for, I’m as pumped as they are.
[...]
[James Hong in a sex scene.]
Starkwell: You think he wrote this movie because no one else would cast him in a sex scene?
Lovelock: Man, he’s really going for it.
Starkwell: As a viewer, I very much am not going for it.
[...]
[Rapidly decaying Dr. Po drinks Black Magic potion of youth.]
Lovelock: That dude has a glass eye!
Starkwell: Is that all that you got from that whole sequence?
Lovelock: Well, I also noticed that there were two needlessly half naked girls chained up…
[...]
There was an auction scene with some of the eightiest hair you’ve ever seen.  And, as we all began to drown in a sea of huge shoulder pads, awkward hats, terrible acting, even more awkward dialogue, oddly place random nudity, and some of the worst action sequences ever choreographed and committed to film, the writers not-so-subtly plant the seeds for an insanely convoluted and nonsensical plot.  Lovelock seemed intrigued, but Starkwell spent at least ten minutes crying, possibly because he was laughing so hard or possibly because he was terrified of just how bad this may turn out to be.
[...]
[Dr. Po performs interpretive dance.]
Lovelock: Is it still racist against the Chinese if it’s an old Chinese guy being racist?
Starkwell: I can’t answer that, but I can tell you that I’m offended.
Lovleock: Oh and obviously the German guy is evil.  And gay.
[...]
There’s a character named Jeremy, and he has a great hat, big round glasses and the voice of a fourth grade girl.  Also he doesn’t drink, which might be important if it turns out the wine is bad.  Spoiler alert, it ends up meaning nothing.  But if he is going to be the hero and voice of reason in this movie, as Starkwell said “Does it have to be so high pitched and nasal?”
[...]
[Lovelock on the Jeremy character.]
Lovelock: He kind of looks like if Brandon Lee dressed up as a nerd.
[...]
[Girl vomits out live spiders.  African-American servant with bushy ponytail takes her screaming friend away.]
Lovelock: That’s why I never take candy from strangers.
Starkwell: Wait, that’s why?
Lovelock: Oh shit, Milly Vanilly!
Starkwell: Well, at least the peeping tom guy died too… apparently from an exploding neck?
[...]
[Flashback to some kind of ancient Chinese warrior attacking Po’s mother.]
Starkwell: In ancient China, men wore skateboarding shoes?
Lovelock: Are you kidding me? Hell yes.  The ninjas invented sneakers…
Starkwell: But… you… oh never mind.
[...]
[Po picks up the blonde bombshell.]
Starkwell: I’m just not buying James Hong as a suave and debonair ladies’ man.
Lovelock: Are you kidding me?  After seeing this, I’m hoping he’s cast as the next Bond.
Starkwell: You do realize that he's like seventy-five now?
Lovelock: He could still kick Roger Moore's ass.
Starkwell: Yeah but... oh never mind.
[...]
[Jeremy uncovers the truth, and talks himself through it.]
Lovelock: If I sounded like that, I would never talk to myself.
Starkwell: I’m glad someone knows what’s going on, since I sure don’t.
Lovelock: Correction.  If I sounded like that, I would never talk period.
[...]
The movie has a way of waking you up right as you fall asleep.  Nothing happens for a while, and then just as you dose off… BAM, something out of control flies at your face, hard.  Lovelock thinks it’s a good thing.  Starkwell thinks it’s less than good.  Both, however, begged the question “does Jeremy really need to wear such lame looking cardigans?”  And then the overly sweaty Jeremy found Dick Print Guy dead at the hands of creepy zombie woman thing locked upstairs, and Lovelock and Starkwell cheered.  Look, it makes sense if you've seen the film.  Wait, no, it still doesn't.
[...]
[Expendable characters chase a decomposing Po.]
Starkwell: Chapter one of the vineyard survival guide: Follow old crazy sword-weilding melty-faced Chinese guy into his secret basement laboratory.
Lovelock: I think chapter two talks about refining your bow-hunting skills.
Starkwell: I think it’s going to be a short book.
Lovelock: Oh shit, Milly Vanilly!
[...]
At this point, Starkwell and Lovelock both realized that the wackiness of the movie has distracted them from the fact that we are twenty minutes away from the ending and the zombies haven’t come yet.  As Starkwell put it, “this is bullshit.”  But then he got distracted when Lucas shot a guy with a bow and arrow and Lovelock chimed in with a high volume “ARROWED.”
[...]
[Jeremy is caught and chained up.]
Starkwell: So the girls are stripped to their underwear when caught, but they leave Jeremy in his cardigan and khakis?
Lovelock: Thank you James Hong, I guess…
[...]
I don’t really know what happened next, or what they said, because we were all laughing too hard.  The zombies did finally come.  As Starkwell and Lovelock laughed and danced to the closing credits, it is safe to say, that this movie is the purest form of “so bad it’s good”.  They talked about the open ending, and the possible potential for a sequel and Lovelock noted that he felt “cheated like when Skeletor said he’d be back after the credits in "Masters of the Universe" but then never was actually back ever, and then Dolph Lundgren all but disappeared...”  Starkwell commended him on successfully referring to that movie for the second time.  One thing is certain though, Michael Wong would have to play Jeremy again.  It’s the only way.
Documented by Kev D. and Posted at 21:25