Tales From the Crypt. 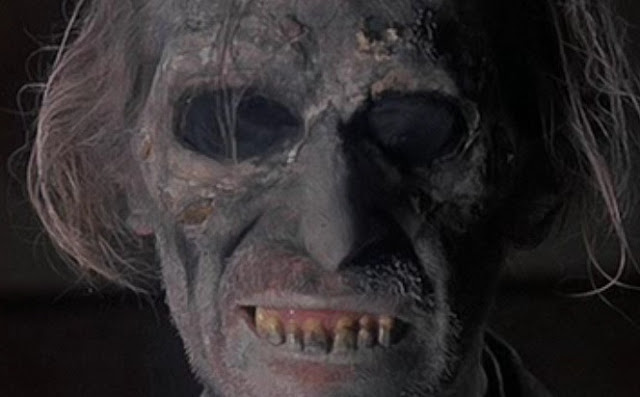 There have been numerous mutations of Tales from the Crypt, but tonight we are watching the 1972 Freddie Francis film.  I’ve explained to Starkwell and Lovelock that not every segment will actually be about zombie(s).  They just looked at me, quite frustratingly, and said, “well then what’s the point?”  Hopefully we will find one.
[...]
[The first segment features a murderous Joan Collins.]
Starkwell: I guess by ’72 they still hadn’t figured out how to make blood look better than that.
Lovelock: Wait, she killed him?  I thought she spread red and orange paint on him.
Starkwell: Why would she do that?
Lovelock: Who knows what the British do for Christmas?
[...]
[The second segment features an adulterer leaving his wife and kids to run away with another woman.]
Starkwell: Oh, thank heavens it was only a dream.
Lovelock: Or was it?
Starkwell: Honestly, I really don’t know.
Lovelock: Or was it?
[...]
The third segment features an evil asshole young’un and Peter Cushing as on old crazy widower.  The asshole guy is so concerned with the value of his Dad’s property that he pretty much ruins the old man’s life, even though he already lost his wife.
[...]
[Peter Cushing hears from his wife via his Ouija Board.]
Lovelock: Dancer?
Starkwell: Danger, you idiot.
[...]
[Asshole sends the old man hate mail.  Old man hangs himself. And then, a year later… Peter. Cushing. As a zombie.]
Starkwell: What kind of a grown man spends every Valentine’s Day with his father?
Lovelock: A dead man!
Starkwell: Wow.  That’s a lot of orange-red paint.
[...]
[The fourth segment features a greedy woman and her magic wish granting statue, her husband dies when she wishes for money.  It gets worse from there.]
Lovelock: See that’s why I never use magic statues.
Starkwell: Yeah, that’s why.
[...]
[The fifth segment features an old military man taking over a home for old blind dudes, cutting corners, and making their living conditions much worse.]
Starkwell: I don’t know that it was necessary for the blind guys to take it out on the dog.
Lovelock: But now they’re rewarding him with a nice treat!
[...]
All of the segments featured people getting their comeuppance in some way, some form of poetic justice.  As a result, this was one of the most satisfying films I have seen in a very long time.  But as Lovelock said “yeah, but it’s not really a zombie movie, now is it?”  I think it counts.  Peter Cushing made it count.
Documented by Kev D. and Posted at 09:00