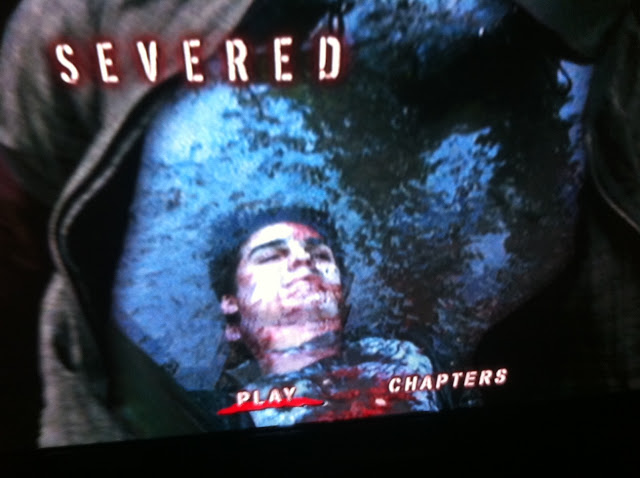 Having already said my spiel about Canadian productions, I will simply say that the idea of a zombie film set in the Canadian forest, with like lumberjacks, sounds pretty cool.  I know that this low-budget 2005 picture probably won’t re-invent the wheel, but regardless, I think it’s only fair that we give it a good old fashioned Starkwell and Lovelock try.  This DVD was packaged together with two other similar genre films.  Usually when a distributor bundles discs together, it’s because they can’t seem to unload them on their own.  Not really a good sign, but considering the price tag, how can we lose?  Well, I can think of a few ways.
[...]
[Activists have camp set up outside of deforestation operation.]
Starkwell: Occupy British Columbia.
[...]
It is clear that this movie is going to have a Green agenda, given that the trees bleed, seem to fight back and that the film is implying that pure evil emerges from the destruction of said old trees.  Lovelock and Starkwell seem happy with the message and the premise, Lovelock even stated that he is “fine with hippies so long as we don’t have to smell them.”  Starkwell noted how impressive the filming location looked and that the logging operation offered “great potential for saw-based kills.”
[...]
[Many loggers and protesters have become zombies or been eaten.]
Lovelock: That’s why I don’t get involved.
Starkwell: Yeah, that’s why.
[...]
[Nerds in lab make nerdy nerd joke, cuts himself, turns zombie.]
Lovelock: That’s what you get for making a bad joke!
Starkwell: So, you take comedy a little too seriously.
Lovelock: The punishment fits the crime.
Starkwell: Harsh.
[...]
[Gate is blocking the bridge out of there.]
Starkwell: They have an enormous pickup truck… why are they worried about a little gate?
[Truck gets stuck in mud.]
Starkwell: Oh.
Lovelock: That is the worst pickup truck ever.
Starkwell: That’s like anti-product placement…
Lovelock: Totally… I’ll never buy a Chevy.
[...]
[They find another camp full of crazy homicidal trigger-happy loggers.]
Starkwell: I think it’s safe to say that cabin fever has settled in to this camp.
Lovelock: That guy is totally on “Glee”.
Starkwell: Why do you know that?
Lovelock: Sadly, he’s not very gleeful in this.
Starkwell: Yeah, cabin fever isn't the same as Saturday night fever.
[...]
[Rita and Tyler kiss and do it and stuff.]
Starkwell: What about the current circumstances is making them feel all sexy?
Lovelock: Maybe it’s the fresh mountain air.
[...]
[Turns out that Rita Vegan-Granolahemp caused the whole thing, when she spiked the tree.]
Starkwell: So wait, is deforestation bad, or is protesting bad?
Lovelock: Both, I guess.
[...]
This is a shining example of how to make a cheap zombie movie properly.  It is cookie cutter without being completely unoriginal, low-budget without ever looking too cheap, and a lot of fun without ever being overly stupid.  Don’t get me wrong, this movie has many problems, but if more of the saturated zombie genre films from recent years were made with this much care, I’d have a lot more DVDs on my shelf, and Lovelock and Starkwell would never sleep again.
Documented by Kev D. and Posted at 08:45