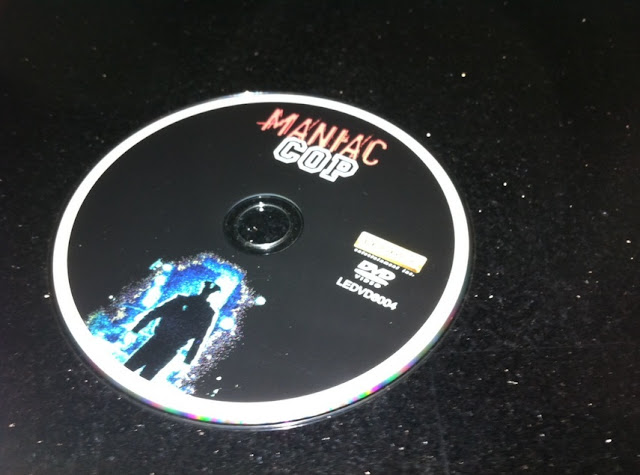 Since his film “Maniac” earned him some horror street cred after dabbling in porno, William Lustig never strayed too far from that formula.  This 1988 work “Maniac Cop” (even found a way to re-use the 'Maniac' moniker) is supposed to be pretty ridiculous.  Genre hero Tom Atkins is in this one, so it promises to at least deliver on the acting front.  Larry Cohen, who wrote and directed the fantastic 1985 epic “The Stuff”, wrote and produced the film.  So, that’s a good sign too.  Lovelock and Starkwell anxiously wait for me to press play as the cheapest looking menu ever repeats itself over and over again on this Legacy Entertainment release. “Play Movie” or “Scene Selection”?  Play movie.

[Maniac Cop asks guy to get out of the vehicle, then kills him.]

Lovelock: That’s why I never cooperate with the police.

Starkwell: Yeah, that’s why… wait… you never cooperate with the police?

[Richard Roundtree is the chief.]

Starkwell: Making a police film in the eighties… Step one, cast sassy black man as the chief of police.

Lovelock: I’m pretty sure step two involves a main character with a checkered past.

Starkwell: Most likely he “shot a kid” or something like that.

Lovelock: Oh, he had a toy ray gun, it looked real enough.

As the movie presses forward, we get many more KILLS, some sweet character development, and a seemingly terrific detective storyline.  Lovelock and Starkwell are hooked.  There were several instances where either one of them would say something about how rad Tom Atkins is.  And for some reason, they kept saying “THRILL ME”.  They did start asking whether or not the Maniac Cop was a zombie though.

Starkwell: Seriously, why wouldn’t they cash in on that chin?

Lovelock: Oh shit yeah! There it is.

Lovelock: That’s why you should never commit adultery.

Starkwell: Yeah, forget love and morals, it’s the potential of your spouse being murdered and you being framed for it.

[Maniac Cop’s hands are cold and huge, and apparently he isn’t breathing.]

Lovelock: And he got shot a bunch of times and walked away? Sounds like a zombie to me!

[We get some back-story on Maniac Cop.]

Starkwell: Detective guy figured all of that out pretty quickly, and doesn’t seem too bothered by the fact that his explanation involves a roaming dead guy.

There was a long jail flashback sequence, mostly in slow motion that involved a brutal naked shower murder, which managed to avoid any accidental side peen.  As Lovelock said “that’s an accomplishment right there”.  Tom Atkins was thrown out a window, but since Campbell’s still alive kicking ass, we can assume the rest of this movie can still kick ass.  Although, Starkwell wondered “is Bruce Campbell is wearing eye liner?”

[Vice Squad Girl is still made up like a hooker days after she is off duty.]

Starkwell: So that wasn’t her undercover costume, she really dresses like a hooker all the time?

Lovelock: It was the eighties and crimped hair was all the rage.

Starkwell: Sadly, for us, so was bad acting.

The movie ended with one of the coolest stunts I have ever seen, and a cliffhanger ending.  Good times were had by all.  Lovelock and Starkwell absolutely would like to check out the rest of the series.
Documented by Kev D. and Posted at 23:30