The Last Man on Earth. 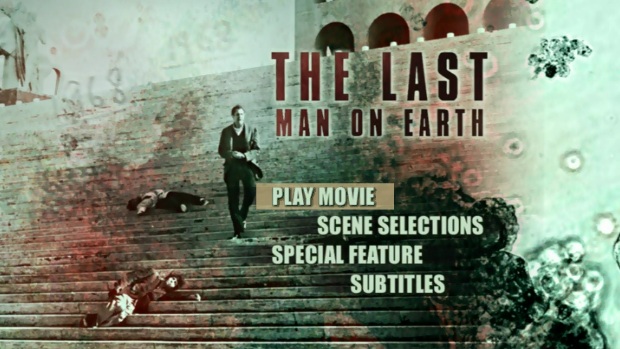 There have been three adaptations of Richard Matheson’s novel “I Am Legend”.  The first of these was a 1964 Vincent Price vehicle, entitled “The Last Man on Earth”.  Apparently an influence on the Romero classic “Night of the Living Dead”, Price’s star power alone should be enough to get some good interest from Starkwell and Lovelock.  The DVD is a beautiful looking MGM release.
[...]
[Dr. Morgan finds a dead body then has a cup of tea.]
Starkwell: Wait, what does he need garlic for?  Is this a zombie movie or a vampire movie?
Lovelock: I think it’s up to us to decide.
Starkwell: Is that a wooden stake?
Lovelock: Maybe he’s making a table…
[...]
Their discussion about vampire vs. zombie went on a little longer, but eventually shut up when they realized how cool Vincent Price is, and decided, “Who really cares?” From now on I will refer to them as zombies.
[...]
Lovelock: If I was the last man on earth, I don’t think I would have such a finely groomed mustache.
[...]
[Morgan puts on some jazz and gets drunk.]
Lovelock: My kind of party.
Starkwell: Drinking alone with creepy zombies calling out your name all night?
Lovelock: It beats what we’re doing.
[...]
[Morgan falls asleep in a church, wakes up after dark, when the zombies come out.]
Lovelock: That’s why I never sleep at church.
Starkwell: You don’t even go to church.
Lovelock: You're right.  That's why I never go to church.
Starkwell: Sure.  That's why.
[...]
The way the zombies shuffle around the house slowly, you can see what kind of influence this had on Romero.  Starkwell and Lovelock are captivated.  It would seem that Matheson himself had a hand in the script, but changed his name in the credits when dissatisfied with the finished product.  So far, as Starkwell has said, “I don’t see why.” It probably makes more sense if you've read the book.
[...]
[Morgan watches home video of his family, now deceased.]
Lovelock: Why is he laughing… oh… wait… never mind.
Starkwell: That is, without a doubt, the BEST laugh-to-cry ever filmed.
[...]
[Very long flashback sequence that shows the beginning of the end.]
Starkwell: Did they have to pick a kid with such an annoying voice and lack of teeth?
Lovelock: Don’t worry.  She won’t be around much longer.
Starkwell: Dude… harsh.
Lovelock: She gets to miss school?  You think she’s fakin’?
Starkwell: Alright, that’s definitely enough about the kid.
[...]
The black and white shots of bodies being thrown into the pit of fire are disturbingly effective, the slow progression of his wife and daughter's illness is terrifying, and as Lovelock puts it, Vincent Price “sells every shot, HARD.”
[...]
Lovelock: If I was the last man on earth, I would not wear such perfectly pleated pants and sweater vests.
[...]
[Morgan sees a live dog.]
Lovelock: MMMmmmmmm dinner!
Starkwell: I don’t think that’s why he’s excited.
[...]
[Morgan sees a girl.]
Lovelock: MMMmmmm dinner!
Starkwell: Again, not sure if that's why he's excited.
Lovelock: It should be.
Starkwell: She seems pretty nonchalant, just out for a leisurely stroll, sometime after the apocalypse.
Lovelock: The sixties were a simpler time.
Starkwell: I’m not sure what that means.
Lovelock: I’m wondering where she got the tweed skirt and makeup after the apocalypse.
[...]
[Morgan shoves garlic in her face.]
Lovelock: That’s no way to treat a guest.
Starkwell: Rude.
[...]
[Girl threatens Morgan.]
Lovelock: That’s no way to treat your host.
Starkwell: Rude.
[...]
Twists and turns aplenty, this story kicks ass.  Although the infected are even referred to as vampires, Starkwell and Lovelock have decided beyond a shadow of a doubt that they are, in fact, zombies.  They both noticed that even when Price is playing a nice guy, he is still creepy.  Maybe more creepy.
[...]
[The new world order comes for Morgan.  Morgan heads to the church.]
Lovelock: Well that's dumb.  Nothing good can come from ging to church.
Starkwell: Wait, why are they all dressed in black?
Lovelock: Maybe they’re beatniks.
Starkwell: Maybe this movie has a bit of an agenda.
[...]
The film ends very suddenly, Lovelock and Starkwell applaud.  I can understand why a lot of people point to this as an important film in the genre.  Almost fifty years old, this movie is still stunning.  It helps that Vincent Price is that cool.
Documented by Kev D. and Posted at 01:00