House of the Dead II. 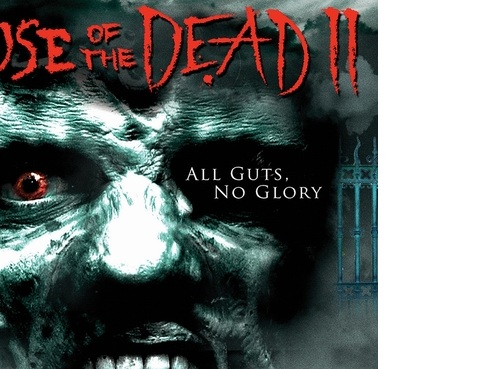 Apparently Uwe Boll’s House of the Dead was so good, that they felt the need to make a sequel, without him.  Michael Hurst directs this 2005 effort.  Our expectations for this movie are so low, that it literally can’t possibly live up to them.  Or down to them, I should say.  It was one of those Sci-Fi channel made-for-tv movies that seem to find their way into the bargain bins at most Wal-Marts and/or grocery stores.  Guess where this one came from?  Play movie.
[...]
[The movie opens with a bunch of college fraternity dudes spraying beer out of water guns onto underwear clad sorority girls.]
Starkwell: ...
Lovelock: Boobies!
[...]
[Girl gets run over by a car, mad scientist grabs her.]
Lovelock: Is that Sid Haig?  Either this movie’s stock just went up, or Sid Haig’s just went down.
Starkwell: Do you really not know which it is?
[...]
The intro credits show zombies essentially destroying the university / town.  We then get introduced to some kind of Zombie Kill Squad, some bad acting, some horrible dialogue, an abnormally large amount of shots of women standing around in their underwear and the ridiculous notion that this could happen at a university in the U.S. and that somehow no one would find about it.
[...]
[Sometime in the middle of the one bajillionth action sequence.]
Starkwell: The tagline said “All Guts, No Glory”, should have read “All Guts, No Story”.
Lovelock: Wait, rewind, what just happened?
Starkwell: They shot more zombies.
[...]
After the seventh or eighth shot of a zombie popping out from around a corner, it actually started to make Starkwell mad.  Lovelock just laughed harder and harder with each one.
[...]
[The main characters electrocute a hallway full of zombies.]
Lovelock: Those electricity effects look like they belong in the Dolph Lundgren vehicle “Masters of the Universe”.
Starkwell: That might be your weirdest reference yet.  I was thinking the Emperor’s electricity hands in “Jedi”.
[...]
At one point, the movie tried to develop the characters with some sad sack story about female lead Nightingale’s family dying.  Starkwell rolled his eyes and Lovelock laughed so hard that he claimed several drops of pee came out.
[...]
[Then they shoot football zombies and end up in a locker room.]
Starkwell: Memo to horror directors, the whole “lights are flickering” thing is played.
Lovelock: So played.
Starkwell: Almost as played as this movie.
Lovelock: So played.
[...]
[The main character rubs dead guts on his body, figuring the smell would camouflage him from the zombies.  For some reason, he figures gun powder smell would give him away, and leaves his guns.]
Starkwell: Seriously?  Man, I give up.
Lovelock: If gun powder would give him away, then why wouldn’t his hair gel?
[...]
I don’t think they were paying much attention anymore, although they did make fun of the fact that in every movie featuring lame soldiers, some soldier instructs his subordinates to use “short controlled bursts” in order to save ammo.  The movie didn’t end there, but really, who cares?  If body count is all that matters to you, then this movie certainly offers that.  The truth is this movie wasn’t horrible.  It was by no means any good either.  If ever there was such a thing as a cookie cutter zombie film, this should be considered as one.  Cookie cutter or not, they could have tried to have at least one character that we might give a shit about.  Also they should have realized that stretching twenty minutes worth of story into an hour and a half is a tremendous waste of resources and the viewer’s time.
Documented by Kev D. and Posted at 20:50