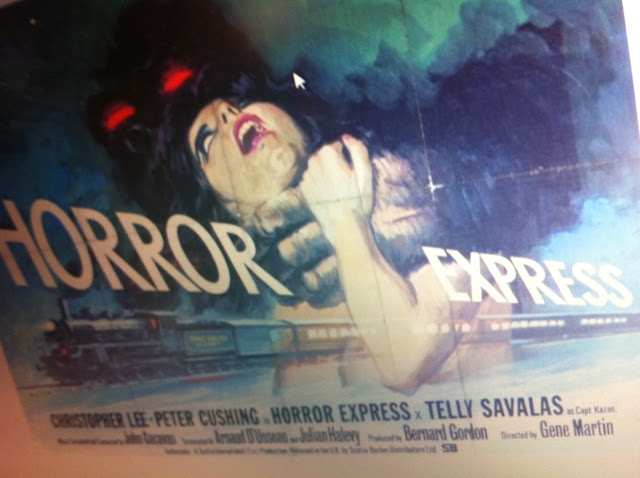 Sometimes good movies are forgotten.  No one sees them for years at a time, until one day they show up on some kind of fifty-in-one movie pack that you see at a store, used, for five dollars.  Was it worth the five dollars?  If you can go even two good films out of fifty, I say you’ve gotten your money’s worth.  This is the first one we are trying off of this particular fifty pack.  It’s a 1972 picture involving a train, a frozen and soon to be re-animated corpse, and, apparently, Kojak before Kojak.  And Peter Cushing. And Christopher Lee.  The movie is Horror Express.  Let’s see if we are one for fifty.
[...]
Lovelock: His character is named Kazan? That’s even cooler than Kojak!
[...]
[Professor Saxton finds a frozen body thing.]
Starkwell: In the seventies, anthropologists have mustaches!
Lovelock: I would imagine so, since this story is based on true events.
Starkwell: But…
[...]
[Cut to horrible Chinese stereotypes, and a white guy playing a Chinese man, racistly.]
Starkwell: Clearly they couldn’t find an actual Chinese actor that would have done that good of a job.
[...]
We are then introduced to a wide array of characters, from a random rich and snooty French woman with a poodle, to a chess playing Russian, a German engineer, even to some eastern European broad willing to sell her body for a ticket aboard the HORROR EXPRESS.   Granted, as Lovelock points out, they don’t know it’s the Horror Express… yet.  As Starkwell said, "It is definitely the Racial Stereotype Express".
[...]
[Recently thawed out and escaped zombie / mummy / demon / caveman / thing uses its glowing red eyes to explode someone’s brain, turn their eyes white and make blood ooze out of his eyes, ears, and nose.]
Starkwell: I don’t think that’s a zombie.
Lovelock: Zombie or not, I like his style.
[...]
They spent the next twenty minutes or so discussing whether or not it was a zombie, and whether or not this counts as a zombie movie.  They missed some of the story, but in the end decided that it counts, especially given his kill power.  From now on, we’ll just say zombie, albeit a zombie with super powers.
[...]
[Shortly after performing an autopsy in a tuxedo, the doctor retires to his quarters.]
Starkwell: He just touched a smooth dead brain… he isn’t going to wash up before trying to get it on with Shiny McDressy Skirt?
Lovelock: Well, he did change into an awesome robe.
[...]
[Doctor Bathrobe gets attacked, sees dead girl.  Zombie gets shot, goes down hard.]
Lovelock: Something tells me that this isn’t over.
Starkwell: Well, Sherlock, there is an hour left.
[...]
The plot got a little more convoluted and wacky, and we were given a lot of close-up shots of people looking INTENSE.  I won’t spoil exactly what happened, but Starkwell and Lovelock laughed real hard at the line “it’s a brontosaurus!!!” and decided to repeat it frequently.
[...]
[Crazy priest talks crazy, and everyone rolls their eyes.]
Starkwell: Given what they just witnessed, should they really be rolling their eyes at him?
Lovelock: “There’s a rational explanation” says the professor.  “Oh yeah, what is it?” asks the priest.  “Well… I don’t know” replies the professor.  In conclusion, OWNED!
[...]
[The possessed detective has a suddenly hairy gorilla arm.]
Starkwell: Considering the doctor and professor are supposed to be so smart you would think they would notice the detective’s abnormally hairy hand.
Lovelock: It’s not nice to make fun of people’s differences.
Starkwell: Yeah but, he wasn’t like that before…
Lovelock: They're not the detectives here.  Besides, he’s Russian.  Aren’t they hairy?
Starkwell: In this movie?  Probably.
Lovelock: Based on true events.
Starkwell: It’s a brontosaurus!
[...]
[Then Telly Savalas shows up, one hour or so into the film… even though he is on the cover front and center.  And he’s some kind of bad dude.]
Lovelock: Who loves ya baby?
Starkwell: Not sure, but he seems to love overacting.
Lovelock: His accent’s a little inconsistent.
Starkwell: This movie’s a little inconsistent.
Lovelock: It’s a brontosaurus!
[...]
In a whirlwind of bad cinematography and awkwardly cut music and sound effects, the newly possessed priest wipes out most of the train, and then creates a zombie army.  Lovelock and Starkwell already sounded pretty unanimously satisfied with the entire thing, but the zombie heavy ending made them jump out of their seats.  In short, who cares about consistency and detail when the film is this much fun?  Also there’s a big explosion at the end, so, that’s pretty cool.
Documented by Kev D. and Posted at 13:15