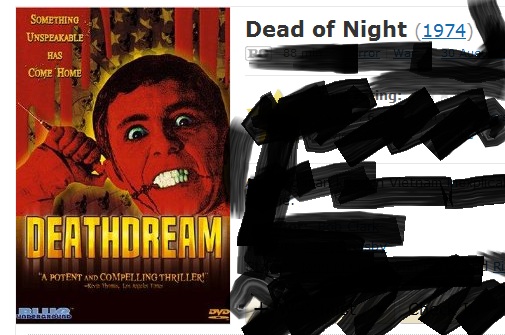 Hot off of the heels of his semi-successful quasi-cult “classic” entitled “Children Shouldn’t Play with Dead Things”, Director Bob Clark and Writer Alan Ormsby teamed back up for a second zombie pic, this one about a singular zombie in the form of a resurrected war vet.  You might think that this has been done before, but remember, this was in 1972, the movie, was “Dead of Night”.  It could be ahead of its time, but that doesn’t always make it good.  Let’s find out, shall we? The DVD is another Blue Underground release.

[Family gets news that their Son and Brother, Andy, has died, and yet, he returns home.  They all react, with tremendous laughter.]

Starkwell: The family seems to be taking it rather well, considering he just told them that he was, in fact, dead.

The movie pressed forward, the story was intriguing, the directing and cinematography were atmospherically chilling, the dialogue was top notch and the acting was rather exquisite.  Starkwell and Lovelock sat quietly, completely immersed in the story.  I’ve never seen them this quiet.  Every time that they would show a close up on Andy’s creepy grin, Lovelock would silently pump his fist and bite his lower lip.

Lovelock: What the… was that a real fucking dog?  He threw it!

[Starkwell just had a single tear rolling down his cheek, silently horrified.]

Time keeps passing, Andy keeps decaying.  He gets crazier and crazier and the film gets scarier and scarier.  Starkwell sits in awe.  Lovelock anticipates some Andy kill power.

[Andy injects his victim’s blood into his veins.]

Lovelock: Be careful, Andy, they say that blood is a gateway drug.

Starkwell: I hate to break it to you, but he’s well past the gate.

Lovelock: These damn kids today with their 'Twilight' stories and their blood.

Andy’s face started melting, and he proceeded to go on a rampage.  Sometime during said rampage, Lovelock stood up and started clapping and laughing, simultaneously.

[To avoid spoilers, I won’t say what happened, but here’s their reaction to the final scene.]

Starkwell then tried explaining the point of the movie to Lovelock, but halfway through Lovelock interrupted him with a very obnoxious and loud “Who cares?  It was awesome, don’t try to ruin it for me!” and then walked out of the room.  Starkwell then started looking up the guy who played Andy to see what else he has done.  Hard to believe Bob Clark directed “Porky’s”.
Documented by Kev D. and Posted at 09:58