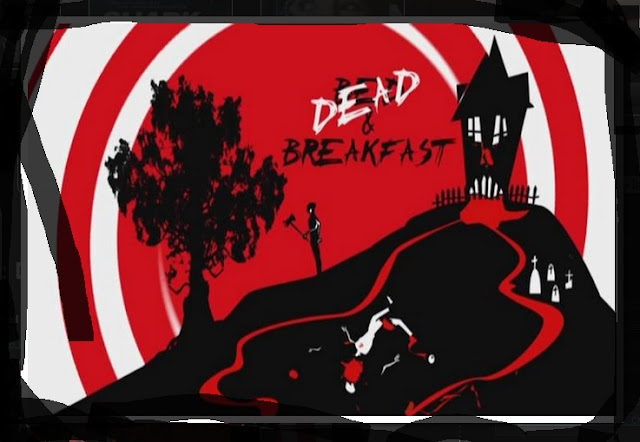 The new millennium has seen countless upon countless zombie films.  This partly because of the success of films like the "Dawn of the Dead" remake, "Shaun of the Dead" and of course, "28 Days Later", and partly because it’s cheap, and shitty filmmakers think that they don’t need a good story, good acting, good characters or to provide a reason to watch the film other than “look, there are zombies in it”.  It is with all of this in mind that I approach "Dead and Breakfast", a 2004 romp from writer / director Matthew Leutwyler.  Hopefully it does not join the ranks of the unwatchables.  Lovelock and Starkwell are cool either way.
[...]
[Interesting opening credits, featuring hand drawn sketches of zombies being killed...]
Starkwell: Cool intro, but now I’m worried that they are setting the bar too high.
Lovelock: If we have learned anything, then they clearly are.
[...]
[They pass a sign that says LOVELOCK.  Apparently that’s the town.]
Lovelock: What the... ?!?!??! ... Well, no matter how this turns out, they get credit for the name.
Starkwell: Except that the pill popper guy just called it Lovecock…
Lovelock: Hopefully he dies soon.
[...]
[Musician guy narrator sings the narration.]
Starkwell: That’s going to get pretty old.
Lovelock: I might have to change my name at the end of this.  Or at least find and destroy all record of this movie.
[...]
[Gang arrives at sketchy bed and breakfast.]
Starkwell: Why would there be a French chef at a middle of nowhere southern bed and breakfast?
Lovelock: Why would the guy from Kung-Fu be there.
Starkwell: Hopefully not to masturbate.
Lovelock: Dude... Too soon.
[...]
As the movie plowed ahead, Starkwell and Lovelock were amazed at the number of recognizable faces in the film.  The soundtrack and dialogue are a little hammy, but the actors manage to make it work… almost.  One thing they both agree on, the honky tonk narrator is the worst part about this movie.  And that many of the jokes don’t work, no matter how hard the actors try and sell them.  Seriously, I’d say one out of ten of the jokes end up working.  Also that Portia De Rossi’s scene looks like it was lifted from another movie.  It probably was.  Also, even in whatever movie it may have been lifted from, in that movie, it was a phoned in performance.
[...]
[MORE OF THE FUCKING HONKY TONK GUY.]
Starkwell: I’m beginning to think maybe he wrote this movie, or at least funded it.
Lovelock: That or “introducing the director’s brother” or something.
[...]
The increasing number of bad redneck jokes and annoying music was getting really old, but then everyone started dying and Starkwell exclaimed “THANK YOU”.  But even as the so-called zombie mayhem continued, redneck stereotypes were still flying everywhere, along with Honky Tonk Narrator’s increasingly annoying soundtrack.  However, according to Lovelock “The gore is decent”.
[...]
[Nerd Zombie Master uses severed head as a puppet.]
Lovelock: Lame.
Starkwell: Like this movie.
[...]
[Honky Tonk Narrator raps.  Zombies line dance.]
Starkwell: Fuck this, I’m out.
Lovelock: Maybe we can mute it, and wait for the gore to come back…
[...]
Starkwell really left.  The following are Lovelock’s solo comments.
[...]
Lovelock: Black magic no erasies!
[...]
Lovelock: Aw come on, movie!  Don’t name drop Haiti like that makes you some kind of cool zombie film.
[...]
Lovelock: When it comes to lamest character in cinematic history, Honky Tonk Narrator has some competition… the Navy Seal Librarian.
[...]
Lovelock: I wish I had left with Starkwell.
[...]
Well in the end, they didn’t bring total shame to the Lovelock name, but they did bring a fair amount of shame.  It’s as close to total shame as possible.  Near complete shame.  The people behind this film clearly love the genre, and love gore, and love trashy cinema, and love weapon making montages.  But loving trashy cinema doesn’t make you a film maker.  And how could anyone think that Honky Tonk Narrator was a good idea?
Documented by Kev D. and Posted at 17:00