Day of the Dead 2: Contagium. 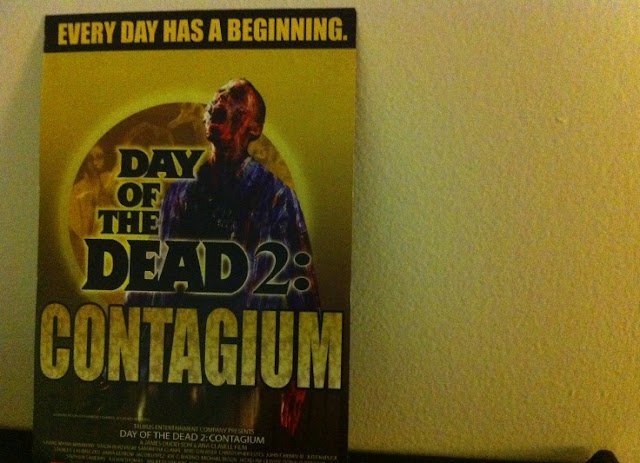 Nothing says exploitation like calling yourself a sequel to movie that you had nothing to do with.  To exploit the Romero title even further, the DVD opens with a preview for the original Day of the Dead.  Thanks Anchor Bay.  The movie hasn’t even started yet, and I already hate it.  On top of that, it took two people to direct it.  Wow.  Starkwell and Lovelock still care to give it a chance, so here we are.

[Flashback to the sixties, hospital in the midst of zombie outbreak.]

Starkwell: That is the worst Russian I’ve ever heard.

Lovelock: I don’t think they had sneakers like that in the sixties.

Starkwell: The acting is awful.

Lovelock: Maybe that’s how people really were back then.

Although they made fun, a lot, they did notice that there was a fair amount of killing going on.  But then a narrator started waxing philosophical and Starkwell shot milk out of his nose.

[The inmates find the Thermos.]

Starkwell: So, apparently a Thermos can sit for forty years on the ground in a "ravine" and look exactly the same, except for a little dirt on it.

Lovelock: Well, yeah, they’re magic after all.  They keep the hot stuff hot and the cold stuff cold.

As we get introduced to the different characters Starkwell and Lovelock agree that the film makers are trying way too hard to make the characters diverse.  The doctor seems cool enough though.

Lovelock: Is that a tampon?

Starkwell: Something tells me that we’ll never get an explanation.

[Attendant shuts lights off to the women’s cells.]

Starkwell: You can see the camera crew in the reflection!

Lovelock: They looked excited, that must have been a really good take for them.

Starkwell: Why would he dictate the email out loud, while typing it?

Lovelock: So we can know what he is writing, DUH!

Lovelock: That’s why I never keep a tampon found in a forty year old Thermos.

Starkwell: There would definitely be more than just that one reason.

As the movie pushed forward and the main characters started turning and looking all gross, Starkwell couldn’t help but notice how often the extras in the movie would look at the camera.  Lovelock felt that there was at least three too many barf gags.  I missed the next half hour of their conversation, because I fell asleep.  It might have been from boredom or from the fact that Lovelock and Starkwell kept on repeating “Tonight, we sleep.”  I think I heard Starkwell mentioning at one point that, at the very least it was “admirable that the film makers haven’t resorted to showing random boobies just for sake.”   The movie focuses a lot on character development and story, which can be the recipe for a good zombie film, if the movie is well written.  Can you guess if this one is?

Lovelock: GET ON WITH IT ALREADY!

[I woke up.  Still, nothing is happening.]

Starkwell: Seriously, this is embarrassing.

Lovelock: On the bright side I’m pretty sure they’re all going to die.

Lovelock: The story of the Tampon?

Lovelock: If he knows what’s going on, why would Beardy McFatass go there?

Lovelock: That’s why I never hang around people I know are about to turn into flesh-eating zombies.

Lovelock: I prefer mindless zombies to ones that hobble around making bad jokes and giggling like little school children.

Starkwell: Why would anyone think a zombie baby is a good idea?  It’s not, it’s the worst.

Starkwell: Ok, why would anyone OTHER than Peter Jackson think that they can pull it off?

There was one good scene, where the super zombie, that pretty much looks like a guy covered in bloody shit, has his limbs ripped off.  Starkwell said “finally”, Lovelock said “too little, too late.”

Starkwell: I think they just went to the mall and asked who wanted to be in their shitty movie.

Lovelock: They probably got paid in hot dogs.

Starkwell: They got ripped off.

Lovelock: I was going to say that their performances were probably more worth a Tootsie Roll, or one of those bags of peanuts you get on an airplane.

A low budget piece of shit like this can sometimes get away with calling itself a zombie movie if it has enough zombie action, or a good story, or good acting, or good dialogue.  Although there was a fair amount of gore (albeit poorly realized), this one does not have enough of any of those things, and what action it does have, takes far too long to arrive.  It’s also well over an hour and a half, which is an absolute eternity for this sort of movie.  It certainly does not have anything to make it worthy of the “Day of the Dead” moniker.  In conclusion, fuck you, "Day of the Dead 2: Contagium”.
Documented by Kev D. and Posted at 20:00