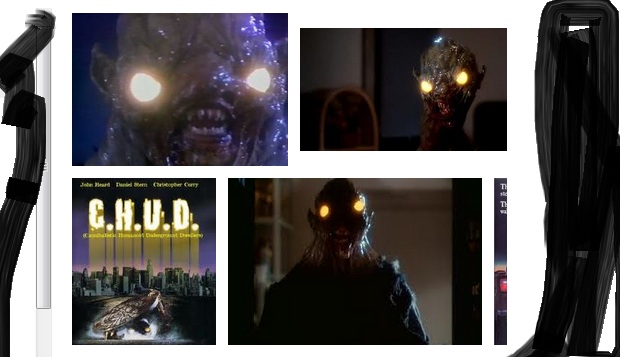 Some movies come along and change everything.  I don’t think that 1984’s “C.H.U.D.” was such a movie, really.  But it did give us the expression CHUD, so there is that to think about.  The film was directed by Douglas Cheek, who apparently never directed anything else again.  Maybe he set the bar too high for himself, or maybe, just maybe, it is so bad he retired forever.  I’m anxious to let Lovelock and Starkwell loose on this Anchor Bay release.
[...]
[Woman gets pulled into a sewer by a nasty hand.]
Lovelock: That’s why you’re never supposed to go near a sewer that has steam coming out of it.
Starkwell: Wait, you’re not?  Oh and, yeah, that’s why.
[...]
[Cop girl rolls her eyes.]
Starkwell: She looked at the camera.
Lovelock: Thrice.
[...]
John Heard is incredible.  They said it, and I agree.
[...]
[Cop stops following them because it’s too smelly.]
Starkwell: That’s some great police work…
Lovelock: No wonder the CHUDs are on the rampage.
[...]
When they revealed the homeless guy’s wound, Lovelock regretted that he was eating a smooth and spicy green curry.
[...]
[Bosh and Rev venture into the sewer.]
Starkwell: Finally, a cop that isn’t afraid of a little smelly.
Lovelock: Do you mean the smell of the sewer or of the Reverend?
[...]
[CHUD eats man.]
Lovelock: Should this really count as a zombie movie?
Starkwell: They look gross and eat people.  So, that's definitely a start.
Lovelock: That girl looked at the camera again.
Starkwell: That nuclear expert guy kind of looks like a zombie...
Lovelock: You think the Ninja Turtles got their idea from this?
Starkwell: You mean the people who created the Ninja Turtles?
Lovelock: No one created them, idiot, they’re not real.  Pfff…
Starkwell: I hate you.
[...]
Daniel Stern is incredible.  They said it, and I agree.
[...]
[Guy in polo shirt swallows Rev’s quarter, for no reason.]
Starkwell: What the hell was the point of that?
Lovelock: I guess if you can afford Lacoste polo shirts, you don’t mind wasting a few quarters.
Starkwell: I don't think they were as expensive back then.
Lovelock: Like you know.
Starkwell: And you do?
[...]
[EPA guy has a plan.]
Starkwell: How can you gas the sewer?
Lovelock: Do you have a better idea?
[...]
Starkwell: I think they just threw dirt into Daniel Stern’s face before every scene.
Lovelock: Probably helped him get into character.
[...]
[While unclogging drain with coat hanger blood spits everywhere.]
Lovelock: That’s why I always just leave drains clogged.
Starkwell: So that’s why I always have to unclog the toilet?
[...]
Then John Goodman was in the movie for five seconds.
[...]
[Kid pulls on doorknob.]
Starkwell: If something was mysteriously banging on the basement door, no kid in all of history would ever pull on the handle.
Lovelock: Well, no smart kid anyways.
[...]
[Homeless man who was previously bitten has gone CHUD.]
Lovelock: Zombie movie!  Officially!
[...]
[Girl kills CHUD.]
Starkwell: Are we really supposed to believe that she could actually cut through a CHUD neck?
Lovelock: Are we really supposed to believe that she could be a perfume and / or undiewears model?
[...]
[Van’s tire dips into manhole, van explodes.]
Starkwell: Wait… what?
Lovleock: I’d hate to drive in Boston if a pothole really could do that.
[...]
Great cast, great story, great action. Cannibalistic Humanoid Underground Dwellers for the win.  They’ve asked me to find C.H.U.D. II, especially since it’s unclear what really happens to the CHUDs at the end of this.
Documented by Kev D. and Posted at 20:00