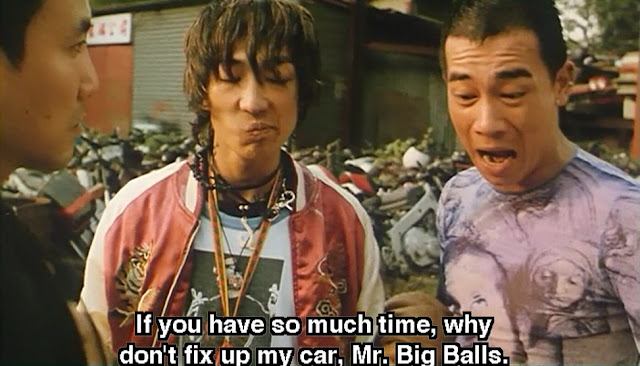 There weren’t too many zombie films produced in the 90s.  As a result, the ones that were produced have a much bigger hole to fill, unlike the saturated 2000s or the gory excess of the 70s and 80s.  In 1998, a film from Hong Kong, "Bio-Zombie", directed by Wilson Yip, splashed onto the scene with extreme hilarity.  Let’s find out what the guys have to say about it.  Start movie.  Subtitles on. Language original. TOKYO SHOCK!!!!!!!

[Introducing the main characters and their phenomenal bromance.]

Starkwell: Are they supposed to be the same age?

Starkwell: But, they’re two grown dudes, hanging around the mall.

Lovelock: Totally.  I bet you like the nerdy sushi chef.

Starkwell and Lovelock then got into a discussion, one I’ve heard before, about how Chinese people are just naturally funnier than us.  They got really off topic, and somewhere between “Aces Go Places” and “God of Cookery”, I brought them back to the movie at hand.  Seriously though, they’re right.

[Some deal between military and sketchy mafia types.  Zombie gets loose.]

Lovelock: That’s why I never deal with the Indian Mafia.

Starkwell: I really don't think that they were Indian.

[Woody and Bee are responsible for the zombie outbreak in the mall.]

Starkwell: Hit a guy with car, feed him mysterious soda pop, see him be dead in trunk, give nerd purple nurple, play video games… The recipe for disaster.

Lovelock: The recipe for entertainment.

Lovelock: Is that a Gameboy Color?

Lovelock: Yeah, it’s soooo unrealistic.  Like that would happen when the zombies come.

Lovelock: The piano music is touching.

Starkwell: I should hate these characters, but I don’t.  I love them.

Starkwell: Did you ever notice how much dust flies off of people when they get smacked, in Hong Kong cinema?

Lovelock and Starkwell were just sitting back and enjoying this thoroughly entertaining movie.  They were no longer saying very much, they were mostly repeating lines from the movie, choice lines like “You’re a piece of shit!”, “I was taking a dump!”, “Eat shit!”, and of course, “Everybody grab a weapon!”  These may sound generic enough, but when you see those words float across the screen in their beautiful context, it’s truly amazing.

Lovelock: Which is your favorite?

Starkwell: I don’t know.  There are so many kills to choose from…

Lovelock: I feel like a kid in a candy shop!

Starkwell: I think the the results are in.

Lovelock: Drill in the mouth.  Unanimously.

They might get mad when I say this, but when the pair had to part ways, they both cried.

Lovelock: Man, it’s all silly and then BAM, they hit you with the intensity and depressing ending.

Starkwell: I tip my hat to you, Wilson Yip.

All in all, they one hundred and ten percent loved this movie, although Lovelock thinks it would have been better if the Sushi Nerd was eliminated from the movie entirely and replaced with more footage of Bee and Woody being hilarious.  One of Hong Kong’s few entries in the genre, and an absolute gem.
Documented by Kev D. and Posted at 14:15