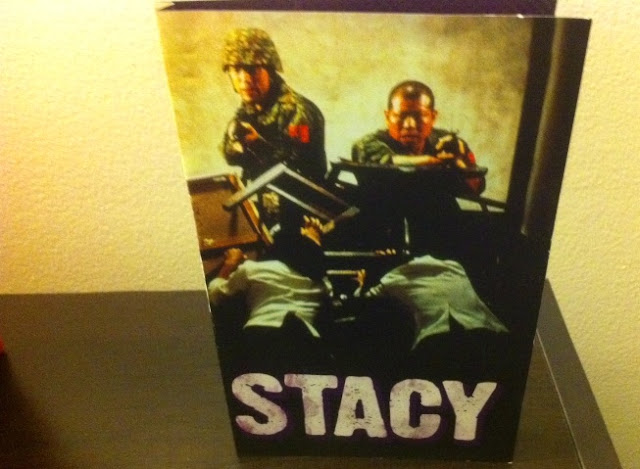 This Japanese movie from the turn of the century seems to have an interesting enough of a concept.  The movie looks to be relatively low budget, and on the back of this Synapse release, they compare it to Romero films, as well as Resident Evil films… yeah.  Apparently when pretty girls hit puberty, they die and become zombies.  Anyways, as much as I know Lovelock hates to read, let’s get this show on the road. “Stacy” is directed by Naoyuki Tomomatsu, who apparently eventually followed it up with MAIDDROID a movie about a robot in a French maid outfit who does its master’s bidding, and EROTIBOT, which… so… yeah…

[Bad sound effects accompany a cheesy rise from the dead sequence.  After the female zombie bites off an arm, the sappiest music ever plays.]

Starkwell: Why would those kids hang around that dead girl body?  Especially, if they know what might happen?

Lovelock: The sound effects sound like they’re from an old Nintendo game.  In a bad way.

Starkwell: The music sounds like a bad soap opera.  In the worst way.

Starkwell seemed frustrated by how often they referenced Romero.  Lovelock wishes that it was dubbed, claiming that it would help the movie be funnier.  The special effects are bad, but in a good way, and as much as the conversation lulled a bit, the guys perked up every time a zombie was shot.  The music, however, made them perk immediately back down.

[After a long time of nothing, we are introduced to a character, some kind of pornographic puppet maker.  Oh man, the music is awful.  You ever hear the demo song on a cheap keyboard?  That’s what it sounds like.  Thanks CASIO.  The main character is a puppeteer.]

Starkwell: Is it just me, or is this whole movie based on ONE idea?  It’s like the filmmakers hoped that they wouldn’t need a story.

Lovelock: I’m starting to think that watching it was a BAD idea.

Starkwell: Seriously, it’s like it’s written by a nerdy high school boy that none of the girls pay attention to.

Lovelock: Yeah, there he is, making puppets.

Let it be known, that having liberal amounts of carnage, referencing people like Bruce Campbell and George Romero, and loading your movie with weird cuts, fake commercials and fake news broadcasts does NOT automatically make it cool.  In fact, if it’s done for no reason other than “just because”, it makes the film superbly lame.

[We’re being introduced to more characters we don’t care about, more Hallmark movie of the week music, and not much more story.]

Starkwell: It’s becoming abundantly clear that nothing is going to happen in this movie.

Lovelock: A lot is happening, it just happens to be the same thing over and over again, and also it’s boring.

Starkwell: I think this whole movie was conceived as a way to dress young girls up like Sailor Moon and shoot them.

Lovelock: That might be the only thing it has going for it.

Then there was an incredibly long puppet show scene that put Lovelock to sleep.

[Creepy old guy dissects a schoolgirl, and runs tests on her severed head.]

Starkwell: Fuck this.  I’m out.

Lovelock: Wait, her face is glowing for no reason!  Pixie dust!  Come back, it’s like Re-Animator, only bad!

With Starkwell gone, Lovelock had to try and watch the rest on his own, and while the delightfully gruesome amounts of gore should have pleased him, he seemed ultimately disinterested.

Lovelock: I’m coming with you.

Since they weren’t going to finish it, I allowed myself to fast forward through the rest.  I don’t think I missed much.  Spoiler alert, everyone dies and I don’t care.  “Stacy” was occasionally funny and frequently gory. But recalling movies like “Wild Zero” and “Versus”, I know what the Japanese are capable of, and this is a tremendously low point.  I would assume that both Starkwell and Lovelock agree with me, but as you know, they left a while ago, citing irreconcilable differences with this movie.  Apparently, it’s based on a book.  Maybe it works as a book, but as a film, it did not.

[I thought it was over, and called Starkwell and Lovelock back.  But it wasn’t over, and they caught some kind of slow dance scene between Puppet Master and the girl dressed as Little Bo Peep.]

Lovelock: You said it was over!

Starkwell: Oh man, movie, stop trying to make a point!  You don’t have one! You suck, movie!

Lovelock: That piano music comes on EVERY FIVE SECONDS.

Then it really ended, after another forever minutes, and I threw the movie out the window, and set my eyes on fire.
Documented by Kev D. and Posted at 23:45