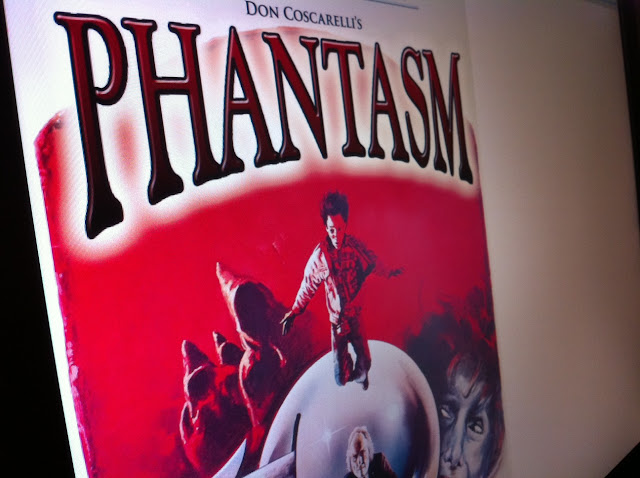 I’ve been meaning to sit down and watch this one for a while.  I’ve tried to not build it up too much to Allen and Lionel.  This ‘Anchor Bay’ release begins with a preview for ‘Survival Quest’ in which Lance Henriksen looks like some kind of Hippy Rambo.  But we’re here to watch another Don Coscarelli picture: ‘Phantasm’.  After sitting through, quite possibly, the cheesiest looking menu intro, we begin.
[...]
[The movie starts out with two people going at it.]
Starkwell: I wonder how many movies in history have started with a woman moaning.
Lovelock: Not counting porn? Not enough.
Starkwell: Not enough good ones, unfortunately for us, at this particular moment in time.
[...]
[There’s a funeral going on.  The main character mentions that his little brother would not be attending.]
Lovelock: While most teenagers try and peep into bedroom windows, little DumpyFace McGirlsHaircut spies on a funeral procession.
Starkwell: I think we’re supposed to assume that’s the little brother… who they just mentioned.
Lovelock: Right.  I knew that.
[...]
[The dialogue doesn’t always feel very authentic.  Main character rides a lame looking bike.]
Starkwell: “I don’t really get off on funerals”? Who talks like that? Like the assumed norm is that people do get off on them.
Lovelock: Is he riding a girls’ bike?
[...]
[Little brother follows the main character around at night, and watches him pick up a girl at a bar, take her to the cemetery, and attempt love making.]
Lovelock: Spying on your older brother having sex in a cemetery:  Issues.
Starkwell: Closeup of breasts, followed by shot of dude-ass.  This movie is taking a turn for the worse.
Lovelock: Are those panties in his mouth?
Starkwell: I don’t know about this.
[...]
Starkwell looked ready to walk out… but then a creepy dream sequence convinced him to stick around.  Lovelock isn’t going anywhere.  You know, he once sat through all of ‘Blacula’ without fast forwarding – i.e.: he’s nuts.
[...]
[Main character never changes, apparently.]
Starkwell: He’s been wearing that ‘Rolling Stones’ shirt for two days now.
Lovelock: Maybe he’s like a super hero.
Starkwell: Probably a pretty smelly one.
Lovelock: Captain Bad Hygiene.
[...]
[Little brother breaks into the creepy house, is chased by some goons, and one of their heads is drilled into by a flying sphere.  The kid survives, but watches it all.]
Lovelock: Oh my God!  We need to some more of that sphere.  RIGHT NOW.
Starkwell: The kid really just sold that “oh shit”.
Lovelock: Shut up, now.  This movie just got incredible.
[...]
[Lots going on.  Weird demons zombie dwarf creatures with custard blood are after the main character and his little brother.  Things start making a little less sense.]
Lovelock: So many different colored oozes.  It’s hard to keep up, really.
Starkwell: Did he just tell his thirteen year old brother to shoot to kill?
[...]
[It turns out that the creature they just killed was a friend of theirs who had recently passed away.  The oozing corpse is then transferred into the freezer of the ice cream truck that they have been riding around in.  One of the side characters, for some reason, worries about mixing the dead body with the ice cream.]
Starkwell: Wait, they just killed their dwarf zombie friend and he’s worried about getting his ice cream dirty?
Lovelock: Well the ooze is all thick and yellow… it could get mixed in with the sorbet and then who would know?
[...]
[After a crash, they go to open the freezer to see if the zombie thingy is still in there.]
Starkwell: Oh come on, why would he open it?
Lovelock: Hopefully not to get ice cream.
[...]
[The main character decides the safest thing to do is to lock his little brother in a room while he goes after the bad dudes.  Little brother starts creating a bomb, to escape with.]
Starkwell: Why would you lock him in a room when those things are after him?
Lovelock: He knows what he’s doing.
Starkwell: Tape, shotgun shell, hammer, bead.  And just like that, MacGyver is invented.
[...]
[Main character jumps out of his car right before it slams into a pole, and explodes.]
Lovelock: Car hits pole, instant explosion, bigger than the Death Star.
Starkwell: He just jumped out of a moving vehicle, how is he ok?
Lovelock: Shhhh… just give in.  It feels better.
[...]
[Little brother sticks his head through a magic gate and sees a desert and some creatures, and somehow figures out EXACTLY what is going on.]
Starkwell: While this is all visually appealing and spectacular, that the kid got all that from one short trip through a magic window is just stupid.
Lovelock: You’re able to suspend your disbelief enough to allow dwarf zombie slaves, but not to allow the kid to be a genius?
Starkwell: Just look at his hair and denim jacket.  MacGyver moment aside, he’s no genius.
[...]
[Turns out the girl he picked up at the bar earlier WAS the creepy tall bad guy that has been after them all along.]
Starkwell: Hang on, the girl was actually the Tall Man?
Lovelock: So he had the old man’s panties in his mouth?
Starkwell: So the kid was spying on his brother doing it with the old dude?
[...]
[The movie ends, very suddenly.]
Starkwell: Well, I’m confused.
Lovelock: I just realized his name was Jody.
Starkwell: What the-
Lovelock: Best ending ever!
[...]
While I’m still apologizing to Starkwell, Lovelock is off in a corner writing “WE NEED MORE SPHERE” with permanent marker on at least three of his undershirts.  Maybe the three follow-up films will help convert Starkwell.  Until we meet again, Coscarelli.
Documented by Kev D. and Posted at 07:30