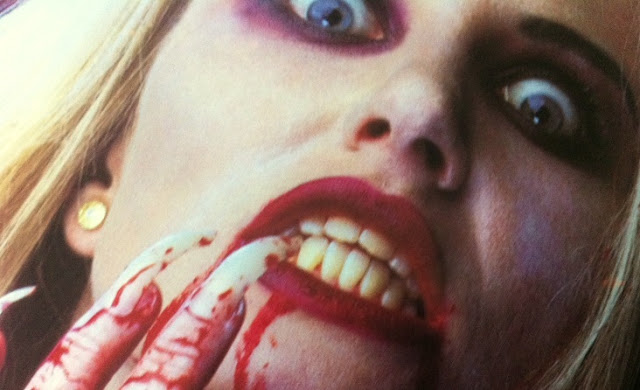 Infamous French director Jean Rollin is definitely an acquired taste.  Whether or not I have acquired this taste remains to be seen, but I figured now was as good a time as any to expose Starkwell and Lovelock to some of his work.  “La Morte Vivante” is presented here in widescreen on this ‘Redemption’ release.  We speak French, so subtitles are not necessary.  When you tell it to play the movie, we are immediately presented with a shot-on-video ‘Redemption’ intro of a naked large breasted woman, covered in blood, whose implant scars are clearly defined, being, well, molested by some kind of vampire thing… This had better not be an indication of the quality of the movie.

[Grave robber falls and hits his head, worst acting ever, chemicals spill on dead girl, she reanimates, pokes his eyes out.]

[Wannabe Actress, who claims to be an aspiring photographer, throws temper tantrum.  No one seems concerned that a random girl in a night gown is walking around slowly in a field.]

Starkwell: Wait, so that didn’t strike her as odd?

Lovelock: What do you mean? She took out her big zoom lens.

[The real estate agent, in Dead Girl's house, investigates a noise, realizes that it’s a rocking horse that is moving on its own, she simply smiles and stops it from further rocking.]

Starkwell: The characters in this movie don’t seem to question things all that much.

In true Rollin fashion, the movie is moving now at a snail’s pace.  It’s not necessarily a bad thing.  It’s well shot, the music is adequate, and the atmosphere is as eerie as it gets.  One might say that the movie oozes forward at a deliberate pace.

[A couple enters the empty house in order to make some sex.  But, hold on a minute, Living Dead Girl is inside!  And she’s playing the piano!  Eventually she slays them.]

Lovelock: I guess it wouldn’t be a Rollin movie without full frontal nudity.  Unfortunately, this time male frontal nudity is also included.

Starkwell: So wait, they hear a piano sound and assume it’s nothing?

Lovelock: See, that’s why I don’t go and have sex in abandoned castles in the French countryside.

It’s hard to imagine why it would be necessary for the girls in this movie to be naked all the time, or why they would need to show one girl washing the other naked with her bare hands, or what would drive a person to cover up a double homicide for her weird bloodsucking mute lesbian lover, the Dead Girl, or how someone could react so calmly to everything that she is witnessing, but all of it is happening at breakneck speed.  Well, that is if breakneck means super slow, which it doesn’t.  And then Lesbian Lover lets Dead Girl suck her blood.

[Wannabe Actress finally starts asking around about the creepy girl she photographed in the field.  Her boyfriend Professor Mustache, a.k.a. Captain America, pretty much makes fun of her.  Nonstop.]

Starkwell: Nancy Drew is on the case!

Starkwell: This movie should be called the Boring Dead Girl.

[Lesbian Lover pretends to be stranded on the roadside in order to get a meal for Dead Girl.  Good Samaritan, who pulled over to help stranded Lesbian lover, starts freaking out when Lesbian Lover gets all crazy on her ass.]

Lovelock: Now that’s why I don’t help people stranded on the road with a broken down car.  Somewhere in the middle of nowhere in France.  In the early 1980s.

Starkwell: The scream sounds completely different from one cut to another.

Starkwell: But it  sounds like a completely different voice!

Then there was an incredibly awkward cut, where Dead Girl shakes her head and screams, and then it immediately replays the same cut over again, in slow motion, with a lot of reverb on her scream.  I think some milk shot out of Lovelock’s nose.

[After her encounter with Dead Girl and Lesbian Lover, Wannabe Actress runs away, top speed.]

Starkwell: Why didn’t she just get back on her bicycle?

Starkwell: Oh for the love of God, please do it!

Lovelock: Put her out of her misery, and, as a result, put us out of ours.

[Randomly the movie then cuts to a French folk band called the Fireflies.  It goes on for a really long time.  Let’s assume the band were friends of Jean Rollin’s.]

Lovelock: Did you change the channel?

Starkwell: Well, for starters, it’s a DVD, and secondly… why would the other channels be in French?

As the music video continues playing out, Lesbian Lover searches for a lonely vulnerable woman to feed to Dead Girl.  Lovelock and Starkwell continue to search for a reason to keep watching. Lesbian Lover kills the woman to feed Dead Girl, making sure to expose the victim’s enhanced breasts.  Rollin makes sure to focus on these breasts at great length.  This is not helping Lovelock and Starkwell’s quest.

[Wannabe Actress’ face is set on fire, and she practically explodes, and then dives into the castle's moat.  Captain America gets an ax to the face.]

Lovelock: That was honestly the best thirty seconds I’ve had in a long time.

Lovelock: Is it just me, or did this movie turn out amazing.

Starkwell: If Lesbian Lover really would be willing to do all of that for Dead Girl, and doesn't want to live without her, then where the Hell has she been for the last twenty years?

Lovelock: Are you not watching this lengthy flesh eating scene?  Seriously, does anything else really matter at this point?  Oh shit, she ate her finger!

While there was a little too much bad acting and random screaming throughout the movie, overall, it was alright.  Lovelock wants to re-watch the last scene again, but with the sound off.  Seriously, half of this movie is women screaming.  I think a quarter of it is people looking confused.  At least one eighth is boobies.  In any case, both Lovelock and Starkwell have expressed interest in seeing more from Jean Rollin.  Starkwell is still wondering what happened to Wannabe Actress' bicycle.  Maybe they were planning on a sequel.
Documented by Kev D. and Posted at 22:20