Hell of the Living Dead. 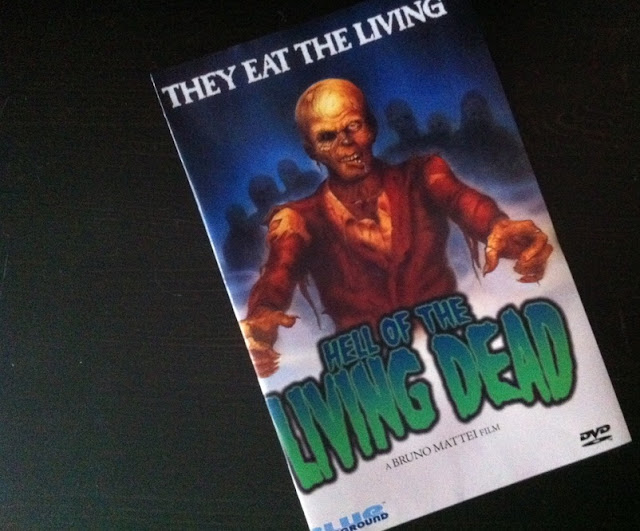 Infamous softcore pornographer Bruno Mattei is generally considered to be one of those Grindhouse legends.  Not sure who is doing the considerations, but whatever.  In 1980 he produced his zombie epic “Hell of the Living Dead”.  He obviously knew how good it was since he released it under a different name, Vincent Dawn.  If ever there was a porno name… Anyways, this is another 'Blue Underground' release.
[...]
Starkwell: It took two people to write this?
Lovelock: It hasn’t even started yet… give it a chance… Goblin did the music.
[...]
[Scientists in a lab, doing sciencey things.]
Lovelock: How come everyone is wearing a helmet except the woman?
Starkwell: Either they don’t feel her brain is worth protecting, or they didn’t want to mess up her perm.
[...]
[Guys wearing HASMAT suits.]
Starkwell: Those clearly aren’t air-tight, you can see his neck and mouth from the bottom flap of the face mask helmet thing.
Lovelock: Oh shit, bitten to death by rat.
[...]
After that, it was hard to make out what they were saying for a little while, as everything was clouded by a thick array of laughter.  But, at some point, one of them definitely said “Way to go, science” and “Good job, Professor Mushroom Cut” and “Man, this is going to be one nutty ride” and “Let’s grow mustaches.”
[...]
[We are introduced to some sort of trigger happy SWAT team.]
Starkwell: Why are they dressed like janitors?
Lovelock: Pffftt.. to blend in, idiot!
Starkwell: Carrying M16s?
[...]
I don’t know if we are meant to like the Trigger Happy Squad, but the scenes that followed showing them stranded on an island, depicted them as racist, sexist, ignorant and blood thirsty lunatics.  Well, Starkwell seemed confused as to whether or not we should like them.  Lovelock likes them.  Then we were introduced to some civilians, also trapped on the island, carrying around a wounded boy.  Starkwell didn't care if we should like them or not.  Lovelock hated them immediately.  But then half of them get eaten, so Lovelock in turn thanked Bruno aloud.
[...]
[The non-eaten half runs into Trigger Happy Gang.  Together they find zombie kid eating his dad.]
Lovelock: I think more movies need to feature SWAT teams unloading on a kid at point blank range after mere seconds of investigation.  They didn’t even give the kid a chance to explain himself…
Starkwell: Not sure that it’s a concept that will catch on.  Also, what was there to explain
[...]
Sometime after the initial carnage scene, Starkwell and Lovelock invented a drinking game where you take a drink every time Mattei uses stock footage of Papua New Guinea.  After five shots in less than a minute, they realized that this was a bad game and decided to stop playing.  Please note, should you attempt this game, we will not be held responsible for your eventual hospital bills and/or death.
[...]
[Main character decides to camouflage herself as a bare-breasted native.  Even though she is white.]
Starkwell: How many natives have perms?
Lovelock: About as many as those that wear mascara, eye liner and plastic hair clips.
Starkwell: Well, at least there was an unnecessarily long close up of her breasts.
[...]
More stock footage, and, thankfully, this time it was of saggy native breasts and a dead man’s cock’n’balls.  Starkwell just left the room forever.  I could try to explain the way Bruno switched back and forth from stock footage to our main characters, complete with fake native that look nothing like those in the stock footage, but nothing I can say will make you understand.  It has to be seen to be believed.  In order to simulate the confusion we were all feeling, I will just list some things that Lovelock said without giving you any context.
[...]
Lovelock: How is any of this related to the scientists at the beginning?
[...]
Lovelock: I’m pretty sure that actor would get sick from having that raw meat in his mouth.
[...]
Lovelock: What kind of a man bends the brim of his hat into an ‘M’ shape?  That kind, I guess.
[...]
Lovelock: More like “Hell of the Smiling Dead”.  Or “Hell of Blue People with Dry Oatmeal on their Face that Laugh while on Camera.”
[...]
Lovelock: In the midst of the apocalypse, Backwards Hat decides to put on a top hat and tutu and dance the Charleston, oh well, at least he’s dead.
[...]
Lovelock: He just looked at the camera… was he talking to me?
[...]
Lovelock: Why isn’t this over yet?  Oh, I see, because more stock footage needs to be shown.
[...]
Lovelock: New drinking game, every time there’s a close up of the girl screaming.
[...]
Lovelock: You got some ketchup on your face there…
[...]
Liberal amounts of terrible special effects, an abundance of stock footage, a lack of a cohesive story and a team of nothing but worthless characters and actors make for one lousy viewing experience.  I hate you, Bruno Mattei.  Lovelock thinks someone needs to remake this one claiming that “it had potential” and that “the eyeball scene at the end ruled”.  Starkwell couldn’t get past the stock footage.  No one should have to.  Entertaining movie, but also, one of the worst I've ever seen.
Documented by Kev D. and Posted at 11:10