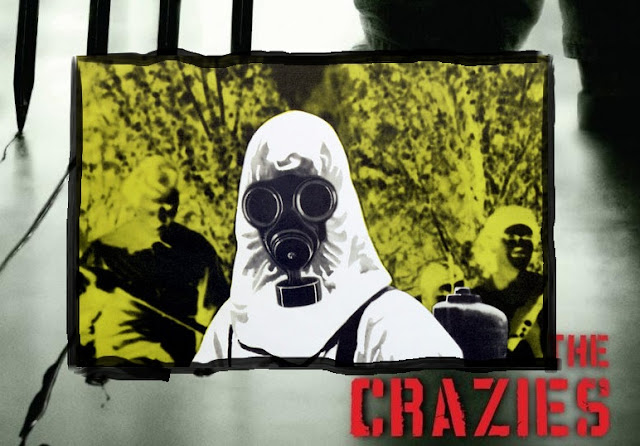 Although not considered a zombie movie, since ‘Les Raisins de la Mort’ is often considered as one, I will count George Romero’s ‘The Crazies’ into the mix.  This is streaming off of Netflix, so, the price is right, now let’s see if it’s worth the time.  Play movie!

[Enter the leading men, they are not exactly handsome.  Female lead wears a winter hat.]

Lovelock: I don’t know he has a certain rugged quality.  She seems to like it.

Starkwell: She certainly has an awesome toque.

Starkwell: Do doctors always walk around with a stethoscope?

[The military pretty much wants to wipe out the town.]

Lovelock: Whatever, the mayor should get with the winning team.

Starkwell: I think the crazy granny that killed the guy with her sewing needles is on the winning team.

[Still unsure if the female lead is sick, the main characters watch her laughing at a pile of corpses set ablaze.]

Starkwell: She’s laughing at the burning bodies, and they’re not sure if she’s sick?

Lovelock: He can’t see clearly through his thick unibrow.

Starkwell: He’s crazy, the other guy’s stupid, the girl’s a flake and the father’s a pervert.  Oh, and she’s still wearing that toque.

Lovelock: Maybe it’s how she keeps the crazy out.

Starkwell: I don’t think that he’ll be ok.

Lovelock: Nonsense.  He said he’s going to meet him at the Zebra Club.

Starkwell: Yeah, maybe at the big Zebra Club in the sky.

[The guy with the beard is back.]

[At last, the main character decides to put on one of the E.T. Hasmat suits.]

Starkwell: How is it that it took them this long to think of putting on one of those outfits?

Lovelock: There was no other opportunity.

Lovelock: No other opportunity.

[Movie ends, but seems to indicate that this is not over.]

Lovelock: I smell a sequel!

Starkwell: You realize that the movie is almost 40 years old, and that there was no sequel right?

Lovelock: Man, I bet the sequel is going to pick up right where this one left off.  Sooner or later.

Out-of-place ballad-like depressing credit music aside, this movie could certainly be classified as a minor classic.  Starkwell and Lovelock liked it enough that they have expressed interest in seeing the remake, which, hopefully won’t soil the memory of the original like many remakes have.  But that is for another day.

I plop it in to the DVD player, much like a turd is plopped.  Hopefully, this will not be the turd that I assume it will be.  Think of the remake of ‘The Fog’.  Exactly.  Alright, let’s get this over with.  Breck Eisner directs.

[The cops figure out what is going on, almost INSTANTANEOUSLY.]

Starkwell: They figured that out a little quickly.

Starkwell: Yeah, apparently they only need two cops for the entire county.

Lovelock: When they’re this good.

Lionel and Allen made some remarks about how the movie is going really fast.  SO the conversation died down a bit, and they just sat there eating butterscotch pudding.

[Main characters get stuck in their car in a car wash.]

Lovelock: Why are they screaming?  They should be pumped about the free car wash with the waxy goop.

After a little while, the two started to look bored, Starkwell was muttering something about bad pacing and a needlessly long runtime.

Starkwell: Wouldn’t they be melting or something?

[The ending is decidedly happier than the original’s.]

Starkwell: A different ending.  The sign of… any good… remake?

Pound for pound, a decent remake.  More character development, more scares, more action, more fun, more everything.  A little too much, really.  Like a crazy person.  Not to mention, the lack of unibrow on the leading man leaves much to be desired, and, the original always gets extra points for being the original.  Plus, it’s just cooler.
Documented by Kev D. and Posted at 20:30