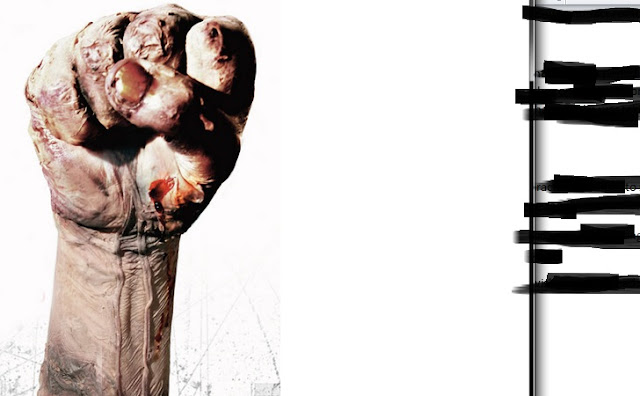 I have trouble believing that with the growing popularity of both zombie films and mockumentaries, that this is the only film I know of that combines the two.  While the Starkwell in me is elated at the possibility of a ‘Take the Money and Run’ style film full of zombies, the skeptic in me knows that it probably won’t live up to what my brain wants it to be, and knows it could be.  This movie has the potential of actually being 'Zombie Hall'... The Lovelock side of me says shut up and play the movie.  Directed by Grace Lee... Alright, let’s do this.
[...]
[Introducing the ‘zombies’ who behave much like normal human beings.]
Lovelock: Wait, so the zombies just act like the rest of us?
Starkwell: Interesting.
Lovelock: That’s about as interesting as homework.
[...]
[The main character, one of the ‘filmmakers’, is so sure that there is more to the ‘zombie’ thing than the zombies are letting on.]
Lovelock: I’m with this guy, something ain’t right with these zombies.
Starkwell: You mean aside from the fact that they are dead people walking and talking?
[...]
There wasn’t much conversation beyond this point.  Lovelock periodically asked why nothing was happening and Starkwell would roll his eyes.  As the conspiracy theories played out in the movie, Starkwell was uncertain if he liked the direction that the film was taking.  Lovelock wanted to know why there weren’t more guts.
[...]
[The movie continues to unfold and the main character continues to suspect an evil zombie conspiracy.  All the while, the zombies are shown living life like regular human folk.]
Lovelock: Somehow, even though it is presented in a very real setting, I find this less believable than an over the top zombies-eating-people type scenario.
Starkwell: Are you only saying that because you wish this movie had more zombies-eating-people action?
Lovelock: Maybe.
[...]
The ending has a surprisingly gruesome twist, and due to the authentic look and feel of the whole thing, Lovelock suddenly becomes concerned that perhaps the documentary was real, and is now preparing a knapsack for the coming apocalypse.  Starkwell keeps trying to reassure him that it was a ‘mockumentary’ but conventional logic doesn’t seem to be working.  Starkwell decides instead to help him make sandwiches, since he is quite hungry.
In any case, much like some real documentaries that I have seen, the film dragged a little in the middle, took its time to get to the point and at the same time, bludgeoned its point to death.  Still, that’s not necessarily a bad thing, when part of the point is that zombies are taking over the world.
Documented by Kev D. and Posted at 08:00