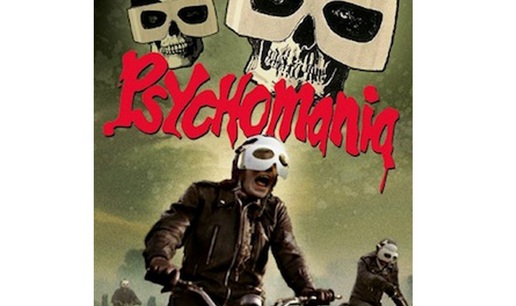 As far as Zombie Biker movies go, there isn’t much competition out there.  That might be because ‘Psychomania’ raised the bar far too high for anyone else to match.  Or, it could be that ‘Psychomania’ was so bad, that no one really tried it ever again.  Well, let’s find out.  This Don Sharp picture is on some kind of DVD that warns us right off the bat, that the negative of this film is “lost”, and that we shouldn’t expect a very high quality picture.  Gentlemen, start your engines.
[...]
[The opening credits have a song that seems to be some kind of ‘Psychomania’ theme song.]
Starkwell: There really needs to be more movies with theme songs.
Lovelock: Like ‘Stroker Ace’?
Starkwell: Definitely not like ‘Stroker Ace’.
[...]
[Main character treats his lady like absolute dirt.  She still seems very into him.]
Starkwell: She needs to read “He’s Just Not That Into You”.
Lovelock: Maybe she’s the exception.
Starkwell: Exceptionally stupid.
Lovelock: She's my exception...
[...]
[Enter a butler with an odd name, and a main character wearing a ridiculous turtleneck shirt.]
Lovelock: Is the butler’s name ‘Schedule’?
Starkwell: I don’t know, but the dollar-store frog medallion will surely protect turtleneck from the evils of the world.
Lovelock: I'm starting to think he might be the evil of the world...
[...]
[Cut to a montage of the biker ‘gang’ looking lame, and doing incredibly tame things.]
Starkwell: They’re a pretty weenie biker gang.
Lovelock: I don’t see what they’ve done so far that’s so dangerous.
Starkwell: Those helmets seem to have terrible visibility, so there’s that.
[...]
[The main character jumps out of a moving vehicle and says something like ‘See ya later.’]
Lovelock: I think ‘Navy Seals’ stole that line.
Starkwell: You shouldn’t know that.
[...]
[At the funeral, some hippy dude sits underneath a tree playing a folk song that lyrically explains that the main character died.  We then witness the main character buried on his motorcycle, in a riding position.]
Lovelock: Holy shit, when I die, bury me like that.
Starkwell:  I promise I'll play that song too…
[...]
[After a long musical montage, it fades out, but then suddenly, fades back in again.  I should add that there was one of the best ‘rise from the grave’ scenes ever, in which he explodes out of the grave riding his motorcycle.]
Starkwell: Wait, they buried the motorcycle with a full tank?
Lovelock: Gas was cheaper back then.
[...]
[Zombie biker goes to bar and picks up a girl quicker and easier than James Bond ever could.]
Starkwell: Zombie boy has a way with the ladies?
Lovelock: Well, yeah, look at his hair.  It’s unbelievable.
[...]
[Main character punches innocent woman.]
Lovelock: She was asking for it, if you ask me.
Starkwell: I didn’t ask, nor will I ever, now.
[...]
[Apparently to return from the dead, you just have to believe that you will.]
Starkwell: “All you have to do is believe!”... ?
Lovelock: It’s a ‘Peter Pan’ remake.
Starkwell: It most certainly isn’t.
Lovelock: I know where ‘The Secret’ got all of its ideas.
[...]
[As the main character continues to stir up trouble, there doesn’t seem to be any reason for anything.]
Lovelock: This movie is shockingly groovy, man.
Starkwell: Not really seeing a story or point yet… And honestly, they’re the least bad-ass people in the history of cinema.  That butler has more edge than the biker gang.
Lovelock: Maybe that’s the point.
Starkwell: That’s not a point.
Lovelock: Not to you, but I give this movie a million points so far.
[...]
[Even though the characters commit suicide in crazy ways like falling off of a bridge, when they revive post-mortem, they seem to be undamaged.]
Starkwell: Apparently none of their deaths disfigured them.
Lovelock: You’d be amazed what modern science can do.
Starkwell: This movie is forty years old.
[...]
Then there was a weirdly out of focus dream sequence, during which Starkwell and Lovelock spent the whole time talking about different British rockers that should have been cast in turtleneck's role.
[...]
[For some reason, the most recent biker suicides are to be given an autopsy, instead of being buried on their motorcycles in riding position.]
Starkwell: Why are they getting autopsies when the first two did not?
Lovelock: The same reason that they are fully clothed at the morgue.
[...]
Somewhere around the moment that one of the “gang” ran into a baby carriage, Starkwell got up to take a dump and said “Don’t pause it.”  He came back in time to catch the ending, which he seemed to like, although felt it would have been more effective had we given a shit about any of the characters.  Lovelock said the frog wasn’t so bad.  That kind of says it all, doesn’t it?  Cool concepts though, and a bitchin’ soundtrack to boot.
Documented by Kev D. and Posted at 08:00