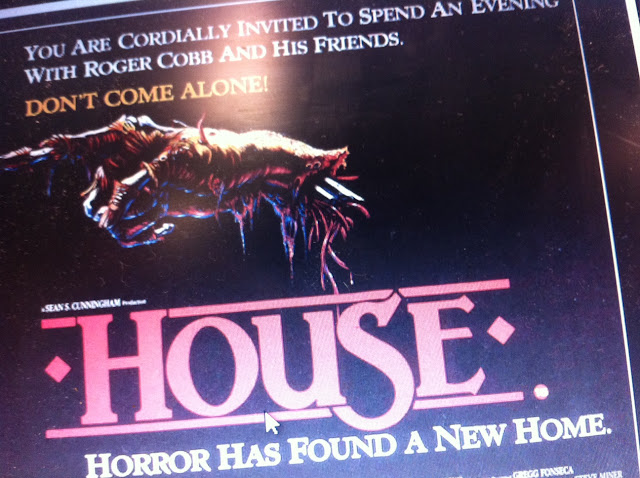 Most people think of Hugh Laurie when they hear “House”, but some of us think “Ding Dong, You’re Dead”.  The DVD we are watching is from , although I read a new version is coming out soon.  Fred Dekker wrote this, and given that he is the mind behind the fantastic "Night of the Creeps", hopes are flying high.  Like Creeps, this also came out in '86.  good year for Dekker, good year for film fans.  Ding dong...
[...]
[Flashback to the past at the haunted mansion of the main character's recently deceased aunt. It might help if I mention that the main character, named Roger, is played by William Katt.]
Lovelock: Mrs Hooper has an odd choice in art.
Starkwell: It’s called foreshadowing.
Lovelock: Yeah well, believe it or not he’s walking on air.
[...]
Lovelock:  Did you see him dive in for that kid?  He might just be, the Greatest American Hero.
Starkwell: You have to promise me that’s the last time, because so far the movie is great, and if you keep that up, you will ruin it.


[I should mention that William Katt played the main character in the television series entitled "The Greatest American Hero".]
[...]
Lovelock: I don’t trust this real estate guy.
Starkwell: Was it the harpoon misfire? Genius?
Lovelock: No, it’s because that actor always plays dickheads.
Starkwell: Yeah, keep the House, that’s a great idea.
Lovelock: It’s an investment.  Rent is for suckers.
[...]
Lovelock: Well we found the movie’s first big flaw: The Low-Cut V-Neck.
Starkwell: Norm just rescued the scene though with AMAZING COMEDY.
[...]
I was eating blueberry scones for a while, so I missed a lot of what Allen and Lionel were saying, but at some point during a flashback scene they mentioned something about Vietnam looking pretty gosh darn wacky.  Also, that the jungle didn’t look like the jungle.  Many more comments were made about Roger’s sweaters.
Then they kept repeating the line “Do you think I’m… Looney Tunes?”
[...]
Starkwell: She’s awfully easy to reach for a famous actress.
Lovelock: Uh, yeah, it’s called realism.
Starkwell: In that case, find me William Katt's number, I want to see if he still has those sweaters.
[...]
Lovelock: Flying tools is scary, but the flapping undead trophy fish is horrifying.
Starkwell: I don’t think you are seeing just how well written this movie is.
Lovelock: It’s hard, when I’m distracted by the timelessly cool special effects.
[...]
Starkwell: Worst policemen ever.
Lovelock: Best fist pump ever.
Starkwell: Worst musical interlude ever.
Lovelock: Still, it’s a good how-to for disposing of a random demon body.
[...]
Starkwell: Wait, so he disappears into closet and Norm decides it's Miller time?
Lovelock: It’s been hard for him ever since he stopped going to Cheers.
[...]
At this point the movie gets loads more intense, as Roger battles his own personal demons, being wonderfully represented by actual demons.  Roger has to deal with the skeletons in his closet.  Anyways, I’m sure you get it.  Both Starkwell and Lovelock are silently hypnotized.
[...]
Lovelock: “Ding Dong, You’re Dead” doesn’t really make any sense once you’ve seen the movie.
Starkwell: I don’t think that’s important.
Lovelock: Well, it is to me.
[...]
Since Allen and Lionel both stood up in applause as the film ended, I assume that they enjoyed the movie.  Not sure who they are applauding, maybe whoever put the movie on.  Believe it or not, it’s just me.
They sat back down pretty quickly when the atrocious song came on during the credits.
[...]
Lovelock: Night Court! That’s where I’ve seen him.
Documented by Kev D. and Posted at 13:45