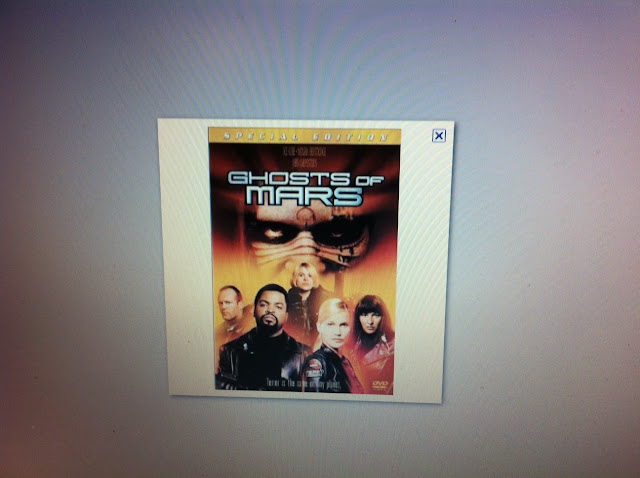 Having read mixed reviews for John Carpenter’s ‘Ghosts of Mars’, I tried to send the two in with low expectations, telling them not to think of Carpenter’s earlier work, but merely to go in blind.  I realize that this shouldn't really count as a zombie film, but that hasn't stopped me before.  It has ELEMENTS of zombie films.  I guess.  Anyways, the incredibly used DVD didn’t cost much, so, it should at least be worth the price.  Let’s go.
[...]
[The hammy acting and odd musical choices make for a surreal atmosphere as they introduce the story, and Ice Cube’s character.]
Starkwell: Desolation Williams?  They may as well have just named him Ice Cube, since that’s pretty much what he’s playing.
Lovelock: Wait that is Ice Cube.
Starkwell: Uh… yeah.
Lovelock: Life ain’t nothin’ but bitches and money.
[...]
For the next, what felt like forever, the two discussed in detail whether or not Carpenter meant for the movie to be this cheesy.  It’s hard to argue it’s an accident when you see that hot air balloon crash.  While it was difficult to see it any other way (I respect Carpenter too much to think that he accidentally made it cheesy), it didn’t always feel like the actors were in on the joke.  Neither Allen nor Lionel could believe Pam Grier died so early in the movie.
[...]
[It is shown that the ‘zombies’ in the movie involve more of the demonic alien possession style people than the more traditional walking corpse.]
Lovelock: Those aren’t zombies.
Starkwell: Let’s bail.
[...]
They took off, but I sat through the rest.  I sort of wish I hadn’t.  I’m sort of glad I did.
Documented by Kev D. and Posted at 13:45