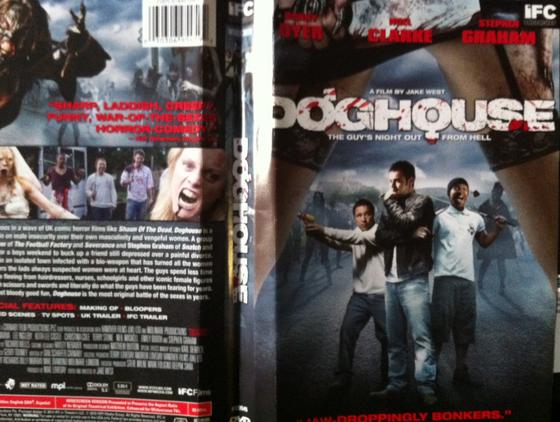 Kind of a new one.  This is a British, Jake West directed picture that I’ve heard good things about it.  It’s an IFC release, much like the recent ‘La Horde’.  Well, let’s not waste any more time.  Let’s go to the ‘Doghouse’.

[The movie starts by introducing each character with a cartoon-like introduction for each.]

Starkwell: Well, I like that they are establishing a lot of different characters, but I could do without the awful picture that they are painting of marriage and women in general.

Lovelock: The main character seems to have a good head on his shoulders.  At least he seems sad about the divorce.

They seem to be hinting that the main guy isn’t a total dumb-ass caveman, but Starkwell keeps talking about the ridiculous way that marriage and women are often portrayed in movies.  Hopefully he can get down off of his soapbox when the characters develop a little more and we see some action.  And then, the movie got insane, fast, and Starkwell no longer cared.

[After magically figuring out that the virus only affects women.]

Starkwell: Only women get sick?  That’s a bit sexist.

Lovelock: Yeah, but the men are the victims.  They eat them.  Do you think this whole movie was written by a Hall and Oates fan?

[Physical comedy in this movie is often accompanied by strings and such in synch with the action.]

Starkwell: The soundtrack is fantastic.

Lovelock: This whole movie is like a sadistic Looney Tunes cartoon.

They went quiet for a while.  Mostly just letting out a lot of giggles and somewhat hypnotized by the over the top action, the surprisingly sharp dialog, and the somehow convincing acting.  But they quickly started realizing that much like 'The Hangover', this movie has no depth, no character, and no heart.

[Turns out the evil army infected the town through laundry detergent.]

Starkwell: It’s in the laundry detergent?  That’s even more sexist.

Lovelock: They may as well have put it in the tampons.

[The hair salon zombie walks around snipping her scissors, non-stop.]

Starkwell: I'm getting sick of this movie, at least a little bit.

[Suddenly the main character goes into a rant about how women are always trying to change men and bring them down.  There is mention of a frequency that paralyses women, that only they can hear.  Like a dog whistle.  They actually compare women to dogs.]

Starkwell: I was waiting for some positive development in the characters, but now the main character got even more jaded and sexist, and for some reason they all seem indifferent that two thirds of their group just died.  Did he learn anything?

Starkwell: Only that the characters didn’t really grow.  They might have even regressed.

Lovelock: Well that, and that there is a magical frequency that only women can hear.

Lovelock: Why would they make that up?

[Cornered and with nowhere to go, the surviving members of the Man Group start running away in a shopping cart giggling and laughing.  It ends on a freeze-frame.  Like Mad Mission, but without any of the good.]

Confused, angry and a little bit offended by the apparent point of the story, Starkwell and Lovelock both stood up, and walked directly out of the room.  I for one am going to go kiss my awesome wife now.  Great on action, decent on dialogue, mediocre on story, and piss-poor on making me give even the slightest shit about any one of the characters.
Documented by Kev D. and Posted at 19:30