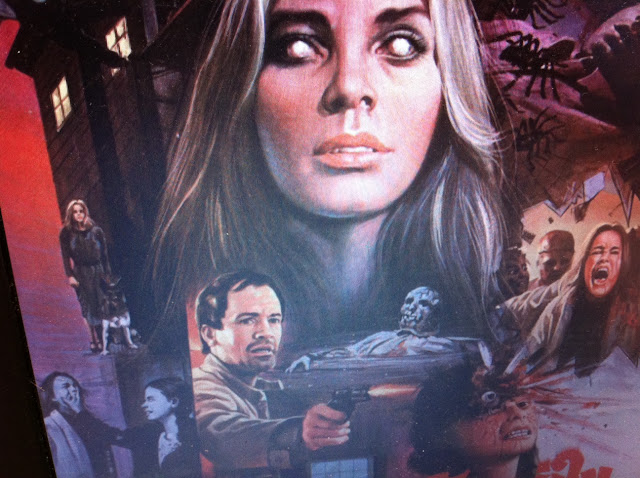 Italian shockmaster Lucio Fulci’s ‘The Beyond’.  It is loosely considered to be a part of his series of “dead” movies, and if it lives up to the hype, promises to be a good one.  This release from Grindhouse Cinema has a fantastically creepy menu, complete with tense music, making this movie already better than most.  The guys have been asking about this one for a while, so, without any further ado, let’s enter the Beyond.
[...]
[Opening shot is a flashback to Louisiana, apparently.]
Starkwell: Louisiana in the twenties was surprisingly out of focus.
Lovelock: And kind of brown.
[...]
[Horrifying images of Hell breaking loose.]
Starkwell: Alright, I’m starting to freak out a little.
Lovelock: My pants are kind of brown.
[...]
[Guy's face starts melting.]
Starkwell: Inappropriately funky bassline!
Lovelock: It’s to help symbolize that his face is becoming JAM.
Starkwell: I hate you.
[...]
For a little while Starkwell kept talking about the added creepy effect that the overdubbing has.  Lovelock rolled his eyes. At the same time, we see creepy white eye women.
[...]
[A plumber comes by to look at a problem with the pipe.]
Starkwell: Hammer and chisel, the tool of choice for all… plumbers?
Lovelock: All good plumbers.
[...]
[The plumber basically gets swallowed by Hell, in a sense.]
Lovelock: I don’t think he’s getting up.
Starkwell: She seems surprisingly unaffected.
Lovelock: There’s a lot of gas down there, she’s probably a bit loopy.
[...]
[Creepy white-eyed blind woman warns the main character of the dangers in the house.]
Starkwell: Take the word of the creepy blind woman?
Lovelock: Wouldn’t you?
[...]
[For whatever reason, the actors chose to try and employ a Southern accent.  It adds nothing to the movie, and there is really no reason for it.]
Starkwell: The whole southern accent thing is getting a bit thin.
Lovelock: I think it’s really authentic, you can hardly believe it’s an Italian production.
Starkwell: That sign reads “DO NOT ENTRY”.
[...]
[Somewhere amidst all of the horrifying imagery and bizarre dreamy dream sequences, confusion runs a plenty.]
Starkwell: I’m so confused.
Lovelock: I’m so happy.
[...]
[There seems to be a near indifference towards death in this movie.  This one revolves around a kid whose mother just died at the hands of the GATE TO HELL.]
Starkwell: “We’re so sorry about your mom, well, see ya!”.
Lovelock: Maybe she can live at the cemetery.
[...]
[For the first time, some people start to seem legitimately scared.]
Starkwell: Where was all of that fear before you decided to break into the creepy forbidden hell room?
Lovelock: Probably in the- GAAAAH I JUST SHIT MY PANTS.
[...]
Lionel wanted me to remind everyone that IBS and horrifying movies don’t often mix well.  Also, don’t eat pepperoni sticks.
[...]
[A man dies by being eating by tarantulas, that start on his face.  An incredible effect for when this was filmed, no doubt.]
Lovelock: I think from now on I might rate deaths on a scale from one to ‘FACE EATEN BY TARANTULAS’.
Starkwell: For this movie?
Lovelock: For ever.
[...]
[Fulci, known for the eyeball gag in Zombi 2, uses yet another eyeball gag here.]
Starkwell: How many eyeball gags before it’s too many?
Lovelock: That’s like asking how many sex before it’s too many?
Starkwell: What does that even mean?
[...]
[Blind woman has a seeing eye dog, that she really shouldn't be putting through all of this.  But then the dog turns on her, thanks to the gate to Hell of course.]
Starkwell: I’d say that’s misuse of a Seeing Eye Dog.  Hopefully-
Lovelock: Woah! Yes! DOG JUSTICE!
Starkwell: If only Jerry Lee had done that to Belushi in ‘K-9’.
Lovelock: The character in the movie or the real Belushi?
Starkwell: What do you think?
[...]
[Randomly, the dead start rising, and we get some righteous zombie action.]
Lovelock: This movie is perfect, is probably what I would say if I understood what was going on.
Starkwell: When the gates of Hell are opened, people pick up and drop their bad southern accents as they see fit.
[...]
[Further Zombie action ensues, Fulci flexes his Zombie muscles.  The main characters hide in a morgue... from the rising dead.]
Starkwell: When the dead are coming back to life, trying to hide in the morgue seems a bit silly.
Lovelock: Hindsight is always twenty-twenty.
[...]
I won't spoil the ending, but the imagery is, for lack of a better way of saying it, COMPLETELY FUCKING HORRIFYING.  The movie ends and Starkwell is just sitting there speechless, until he bolts up, says “This wasn’t a movie, this was a nightmare!” and turns on all of the lights in the apartment.  Lovelock is rocking back and forth in the foetal position, but both of his thumbs are up, so I guess that’s as much of a stamp of approval as any horror movie could ask for.  It’s beyond what they had expected.
Documented by Kev D. and Posted at 08:15