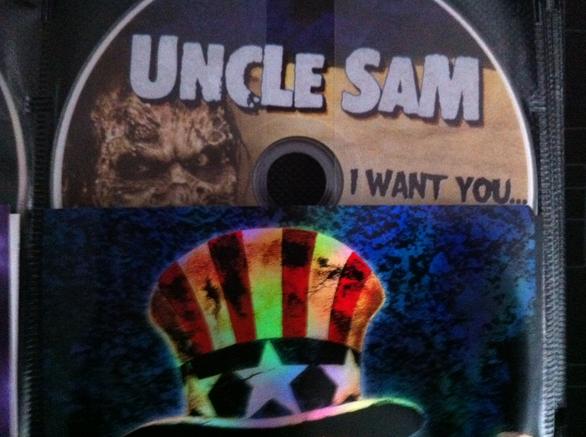 Known mostly for "Maniac" or his more recent "Maniac Cop" series of films, William Lustig explores a similar style with his political statement ‘Uncle Sam’.  This Blue Underground release has all of the usual nice treatments of a Blue Undergound release and opens with a menu that is an exact copy of what is on the front of the box.  No spoilers here.  Let’s find out what they are hiding.

[Annoying kid wakes up and smashes a picture of his Uncle, named Sam.]

Starkwell: His name is Sam, and he is an Uncle?  How convenient.

Lovelock: Wouldn't be much of a movie if it was called Uncle Peter.

Starkwell: Wait, if Uncle Sam was in that guy’s class, wouldn’t that make him like a hundred years old?

Lovelock: He probably just started teaching at a young age.  Like Doogie Howser.

Lovelock: Black Moses just knocked that scene out of the park.  Hard.

[Every death is followed by a cheesy one-liner, being whispered, loudly.  This one involved a head-chopping.]

Starkwell: The one-liners would be more effective if the movie moved a little quicker.

Lovelock: I don’t know, that was a pretty fast cut.

Lovelock and Starkwell then sat comfortably watching Uncle Sam off people for seemingly no real reason.  Every now and then Starkwell would express confusion as to which side the director is on.  Lovelock says he clearly just hates everyone.

[Although it doesn't make him inconspicuous at all, Uncle Sam wears an Uncle Sam costume, complete with mask.]

Starkwell: Clearly they have him parading around in an Uncle Sam costume so they don’t have to pay to have him in the Zombie makeup.

Starkwell: Hopefully that’s a real band and they thought that appearing in this movie was their big break.

Lovelock: You think they made it?

Starkwell: Chef is terrible in these scenes… what happened?

[Finally rid of the Uncle Sam costume, Uncle Sam shows his long locks of flowing hair, even though the flashback that they showed at the beginning, showed Uncle Sam with a buzz-cut.]

Starkwell: He grew an awful lot of hair after dying.

Lovelock: It’s to add an element of realism.

[Credits begin with 'For Lucio']

As the credits rolled, so did Starkwell’s eyes.  Lovelock simply used his hands to make a fart noise.  I think at the end the filmmaker definitely chose a side, but the kid(s) made it hard to be happy about it.
Documented by Kev D. and Posted at 17:15