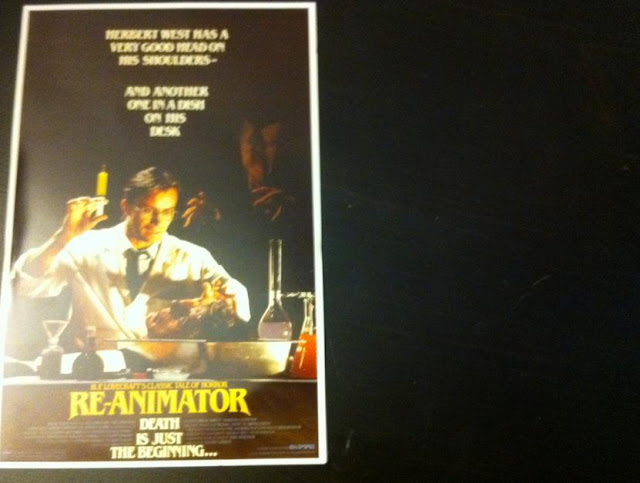 I tried really hard to make them both read Lovecraft’s short story before watching the movie, they claimed that it would take too long, and yelled at me until I put in the DVD.  It’s a two disc release, loaded with special features that I probably will never watch.  Disc 2 may as well be a coaster.  We are here for the movie, and that is what we are about to start.
[...]
[Movie opens with an intense high-speed scene involving decapitation of a re-animated corpse.]
Lovelock: Well, I can already tell we are in for a treat.  Isn’t this better than reading?
Starkwell: I fear that when it starts at such a breakneck pace, it can’t possibly hold it.  It’s already ruined your attention span, I’m certain.
Lovelock: When are these credits going to end?  I already said I didn’t feel like reading!
[...]
[Herbert West is looking to rent an apartment from the 'main' character.]
Starkwell: Never trust anyone who asks whether or not the building has a good basement, especially not when he looks that excited to see it.  And certainly don’t rent them an apartment.
Lovelock: Yeah, that’s like asking how the plumbing is, for the morning.
Starkwell: It’s not the same thing at all.
[...]
[Girl finds her cat dead in Herbert's refrigerator.]
Lovelock: “It was dead when I found him”… real convincing Herbert.
Starkwell: He’s like an angry robot.
Lovelock: In any case, she shouldn't be snooping.
[...]
[Cat returns to life, they throw it at a wall.  The dean refuses to believe any of this is true.]
Lovelock: Well that was a much better zombie cat than ‘Pet Sematary’ had.
Starkwell: Herbert West is kind of an asshole.
Lovelock: The dean is kind of an even bigger asshole.
[...]
[In the morgue, they choose a human body to test on.]
Starkwell: If it took two of them to take down a re-animated cat, how could they think that this is a good idea?
Lovelock: Shut up, this is going to be great.
[...]
[They kill the dean.  I guess they should bring him back now.  The dean's daughter comes barging in.]
Starkwell: Well at least they’re tying this one down.  They’re learning.
Lovelock: Oh man, I can’t wait for it to go all wrong.  I hope she’s next.
[...]
At this point, I could no longer keep up with the conversation.  They were far too excited, and I’m pretty sure Lovelock peed his pants.  Out of joy.  They mentioned several times how awesome West is.
[...]
[Herbert West seems very concerned that they are recording everything on tape, not video, just audio.]
Starkwell: What would the recorder be able to prove?
Lovelock: It’s science.  You wouldn’t understand.
Starkwell: You would?
[...]
[Doctor Hill makes a pass at the dean's daughter.]
Lovelock: The doctor Hill guy is definitely an asshole.  Also, a pervert.
[...]
[Herbert West sneaks around with a shovel and uses it to decapitate the bad guy Doctor.]
Lovelock: More like Herbert West: Ninja.  Did you see him back away slowly?
Starkwell: Right… a shovel, weapon of choice for the ninja peoples.
Lovelock: Like you would know.
[...]
[Re-animated Severed head seems to be taking air into its no-longer-attached lungs.]
Starkwell: How is a severed head breathing?
Lovelock: The answer is science.
[...]
[Dean's daughter immediately forgives the 'main' character for killing her father and bringing him back as a brain-dead zombie.]
Starkwell: She is strangely calm and forgiving.
Lovelock: I wish I could say it was science, but honestly, it doesn’t make any sense.  It’s so unrealistic.
[...]
Starkwell said he was leaving due to unnecessary amounts of severed head to breast action.  But it seems to be over.  Then the violent action picked up again, and he sat back down.  Although he said he didn’t like all the full frontal nudity.  Those poor actors.  So much penis flying around.
[...]
[As Herbert is being eaten alive, he is strangely concerned that his research survives.]
Lovelock: Herbert is a real scientist.  You can take him, but you can’t take HIS RESEARCH!
Starkwell: Did you just reference 'Braveheart'?
Lovelock: I wanna say no.
[...]
[Dean's daughter dies.  'Main' character tries to revive her.]
Starkwell: If he tries to re-animate her, then the character hasn’t really learned much.
Lovelock: Did you really think he would have learned anything?
Starkwell: I guess not.  Oh shit, fade to black.
Lovelock: You think she’ll be ok?
[...]
They sat in silence, but then immediately started talking about things they had just seen in the movie.  I liked the hero, even if the guy didn’t learn anything, and sort of just sat around dumbfounded while things happened.  His emotions are touching, but he’ll never be a great doctor… not like Herbest West anyways.
Documented by Kev D. and Posted at 22:30