The Plague of the Zombies. 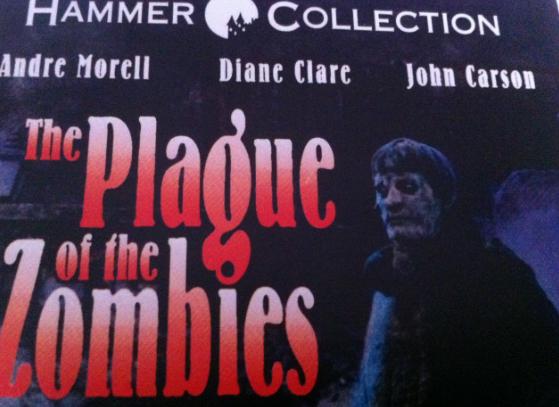 So, we’re going to watch ‘The Plague of the Zombies’, a 1966 Hammer Film about, you guessed it, a plague...  of Zombies.  It says ‘’ on the outside, but the disc seems to be a DVD-R. Ok, and apparently this DVD has no menu, so it just started.
[...]
[Movie opens with bongo players and fire.]
Starkwell: Well, clearly we’re going to learn a lot about filmmaking here, since the first character that appears in the movie looks right at the camera before the focus moves a way from him.  FIVE SECONDS INTO THE MOVIE.
Lovelock: Can you at least wait for the movie to get going before you try and rip it apart?
Starkwell: Holy shit, I might have spoken too soon indeed, because that guy looks like the craziest bongo player ever.  Woah!  He’s screaming!  Woah! Fast awkward cut!
Lovelock: Shhh... I’m trying to follow the story.
Starkwell: Sure you are.
[...]
[The main character has a mustache like Super Mario, he also seems suspicious of everything and everyone.]
Lovelock: Sir James is so clever, he knows something is up. You can’t put anything past this guy.
Starkwell: Probably because everything gets caught in his gigantic moustache.
[...]
The room went quiet for a while, because both became quite engrossed in the story and the surprisingly quick dialogue and actual acting.
[...]
[Weird sick girl tells Blondie about setting her up with a guy named Clive, that everyone else thinks is evil.  Sounds like a keeper.  After that she runs away frantically.]
Lovelock: Clive Hamilton… Might be the best bad-guy name ever.
Starkwell: That's probably why his name was accompanied by creepy music.
Lovelock: Oh seriously?  Just let her go!  Don’t go out in the DAY FOR NIGHT time all alone, that’s just stupid.
Starkwell: That’s a fairly defined shadow for the middle of the DAY FOR NIGHT time.
[...]
[After her meeting with Clive, the meet-cute if you will,  he warns her of landmines on her walk home.  What a Gentleman.]
Starkwell: "Have a nice walk home, watch out for landmines" ... Seriously?
Lovelock: Well, I feel that he doesn’t seem so bad after all.  Except that he has all his servant dudes dressed like polo players.
Starkwell: Or mounties.
[...]
[Doctor Mustache and his little helper monkey dig up a body of a recently deceased guy.]
Lovelock:  Oh yeah, I like this, digging up bodies usually ends well.
[...]
And then there was a scene that made both of them poop their pants.
[...]
[Doctor Mustache's helper monkey, Peter, cries big tears in this scene, after finding out his insane lady friend has expired.]
Lovelock: I think most movies could be improved if everyone acted as HARD as the guy playing Peter.  Those tears are real.
Starkwell: If you say so…
[...]
[The dialogue throughout the movie, is very rich.  Clive 'accidentally' drops a glass and Blondie cuts her finger on it.  He collects the blood into a glass.]
Starkwell: No one writes movies like this anymore.
Lovelock: She didn’t find it odd that he squeezed blood out of her fingers? Plot hole.
Starkwell: You think that’s a plot hole?  You thought the stock footage in ‘Hell of the Living Dead’ added an element of realism, and you’re calling this a plot hole?
Lovelock: It’s different.  What? Shut up.
[...]
[The movie started to slow down a bit, but then zombies started coming out of nowhere.]
Starkwell: Considering the title, this movie seems to be lacking in the plague department, as well as the zom-
Lovelock: ZOMBIE!  BEST MOVIE EVER!
Starkwell: It doesn’t take much with you, does it?
[...]
[Clive's henchmen go after Doctor Mustache.]
Starkwell: I liked the henchmen better when they had their snazzy red coats on, instead of being dressed like rejects from the 'Swashbuckler' set.
Lovelock: Those candles provide an awful lot of light.  Plot hole.
Starkwell: I’m starting to wonder if you really know what that means.  This plot is tight.  Except for the Haitian bongo players, I’m not sure how he would have gotten them past customs.
[...]
[The entire room is on fire, Doctor Mustache manages to make it worse.  Clive comes in with a knife.  Peter is tied up.]
Lovelock: Sir James is great at solving puzzles, not so great at putting out fires.
Starkwell: Peter sucks with knots.
Lovelock: Clive Hamilton might be the worst knife fighter I’ve ever seen.  But he wields a boulder like a champ, wait, scratch that.
[...]
During the credits, Lionel Lovelock and Allen Starkwell were doing jump kicks and playing air guitar.  The credits were short, so it was a rather short display of rocking, but I’m pretty sure it signified that the movie was a success. Well, in my mind, anyways.
Documented by Kev D. and Posted at 14:30