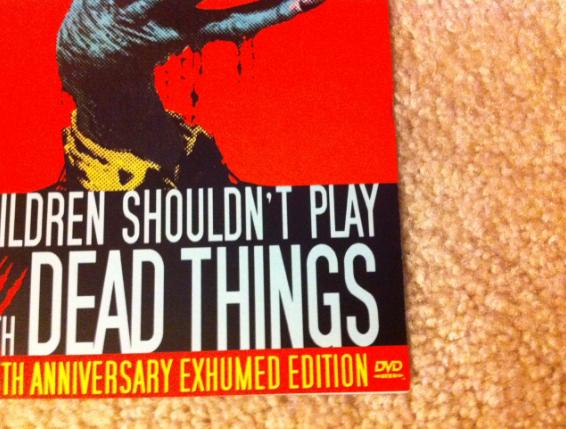 Before 'Porky’s' and before 'Christmas Story', Bob Clark created a few entries in the Zombie genre, one of which was the cult “classic” 'Children Shouldn’t Play with Dead Things'.  We have here now a 35th anniversary edition, which will certainly still look like garbage, given the uniquely piss poor quality of the original source material.  I’ve heard good things and bad, so let’s see what the guys have to say about it.  Starting… NOW.

[The annoying characters travel on a dimly lit island, that appears to consist mostly of graves and trees.]

Starkwell: This movie could have benefited from some lighting.

Lovelock: This movie could have benefited from some budget.

Starkwell: Yeah, I think they spent it all on Alan Ormsby’s pants.

Lovelock: They certainly didn’t spend it on bras for the female characters.

[Low on action, the characters continue to talk about bringing a corpse back to life, I think to help them be better actors.]

Starkwell: I’m surprised to say this, but the dialogue isn’t bad.

Lovelock: I guess... something needs to happen… other than ridiculous rituals.

Starkwell: I’m not sure what any of this has to do with being a theatre troupe.

Not much seemed to be happening.  They may or may not have dozed off, but, they came to just in time to hear the guy talk about how he peed himself.  The first time that the guy said he just peed, it was funny.  The second time, it was a little less funny.  The third time, it was somehow even funnier.  Every time after that, including when Lovelock and Starkwell would randomly say it, was hilarious.

[Everyone continues to be disturbed by the disrespectful way that Orville, the dug-up male corpse that Alan Ormsby has now held a wedding ceremony with, is being treated.]

Lovelock: Alright the whole Orville thing is getting old.

Starkwell: This movie is getting old.

Lovelock: This movie is old.

Starkwell: I just peed my pants.

Their patience was wearing thin, but then all hell broke loose, and there was some damn good Zombie action.  Lovelock and Starkwell didn’t say much after that.  They seemed happy when the movie ended, but I still can’t tell if it’s because they enjoyed it, or because it was, in fact, over.  Time will tell.
Documented by Kev D. and Posted at 21:00